The first Mazes & Minotaurs session of 2021 was a blast!

Meteora the Amazon
Ellipsis the Hunter
Porphyra the Lyrist
Buff the Warrior henchman (now in technicolor level 1)
Chuff the second Warrior henchman (level 0)
Romulus the semi-domesticated (at best) wolf of Porphyra
The group, present in full, including their trusted henchman Buff, the newcomer Chuff, and Romulus, the wolf, wanted to go and explore alternative routes towards the volcano.
In the morning after the funeral of Guff, the village got hit by a vicious thunderstorm. The group stayed in the village, and erected a tent over the sacred hearth of Hestia. Then the village priestess did a rite and blessed everybody.
The adventurers stocked up on arrows, ropes, lamp oil and torches (you may recall how, during the last six sessions, they lacked some of these essentials).
And on the following day, when the weather got all nice and warm and dry, they set out towards the north, along the river that runs close to their village. It was their intention to learn whether this river is the same as the one they followed earlier, or maybe if the two connect up somewhere.
(see the hexmap later in the post) 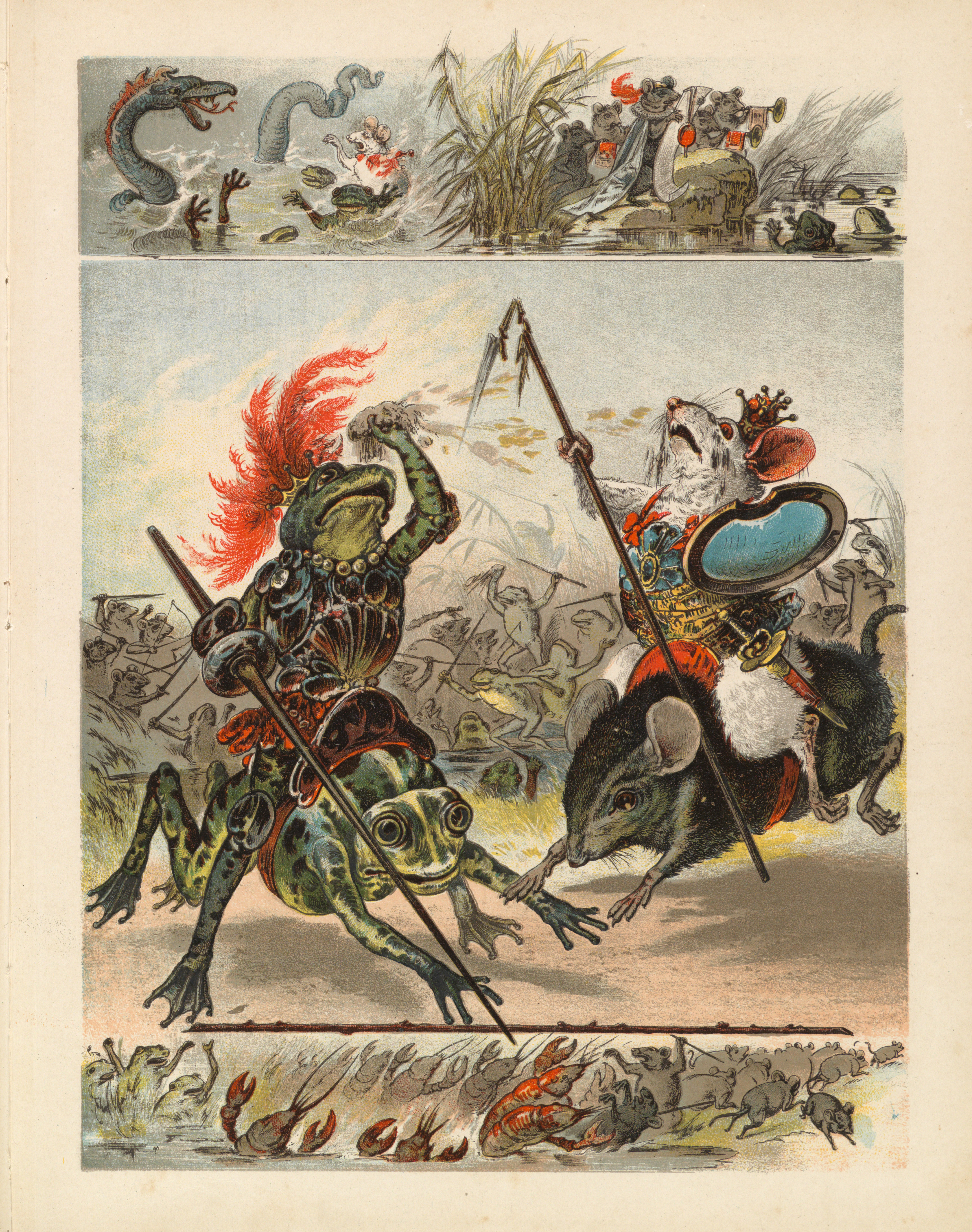 After about a half-day journey, they arrived to a marshy area.
The croaking of the frogs was loud. And Porphyra the Lyrist realized, that the frogs were croaking in dactylic hexameter!!
So she started a call-and-response style song, and the frogs reacted very positively, repeating phrases (in croaks), and approaching the party. Soon, a group of frog-people stepped out from the marshes. The frog-people were about 2' tall, muscular, and clad in wonderful metal armor. Porphyra could communicate with  them when "speaking" in hexameter, but the others only heard croaking...
The frogs had metal weaponry, a crossbow-sized ballista, and chariots pulled by muskrats!
The leader of the frogs was Agamemnon, and he was interested in hiring Porphyra as a court poet, to document the frog-clan's heroic exploits! Even this day, the frogs were just about to march uphill, to war with their arch-enemies, the mice-folk!

The adventurers agreed to join as observers and they all marched uphill. Soon they reached a stronghold, like a sandcastle with 5' tall walls and towers... The citadel of the mice-folk!
Agamemnon marched forward, and a mouse-person met him midway in the center of the battlefield. They exchanged insults and strong words --- for a strange reason, the two animal-folks spoke Greek between each other.
Then the leaders parted, and more mice swarmed out from the castle gates, and then the two armies clashed in the battlefield under the walls of the city.
It was a brutal melee of epic proportions. The adventurers were amazed by the heroic duels and martial prowess of both sides of the war. Much blood was shed, but overall the forces were in perfect balance, no one could overtake the other. After losing about half of their armies, they both retired, dragging their dead off the field.
Then Porphyra approached Agamemnon again, and offered a cunning plan: to build a giant wooden crocodile, bring it to the mice as a peace offering, but actually hide inside it and take the city from within its walls! Agamemnon wasn't completely convinced just yet, so Porphyra changed the crocodile to a giant turtle, and, eventually, to a muskrat. This form was to Agamemnon's liking (especially that earlier a frog-person named Odysseus offered something similar, but wandered off to a great voyage before pulling off the trick).
They all went back to the swamp, and were guests at the funeral ritual of the frog clan. The frog settlement (built on stilts) had a big water lily leaf in the middle. They piled are their dead comrades on the leaf, then turned it upside down, drowning the dead (weighed with offerings and stones) in the swamp. They feasted on dragonflies and drank small goblets of bitter wine diluted with swamp water.
In the evening, they built the WOODEN MUSKRAT; transported it to the top of the hill, and left it. One frog elder told the mice that the war was over.
The mice took the bait and wheeled the muskrat (full of frogs...) inside the citadel. Soon the city was engulfed in flames, and the gates sprang open... the rest of the frog army (until this hidden nearby) charged and entered!
The sack of Ilion Mouse-City was cruel and bloody. Most of the mice were slaughtered. Only one mouse (carrying his newborn son and elderly father) was able to get away --- probably to found a new city somewhere...
After the battle, the adventurers were given gifts: Porphyra received new strings (louder!) for her lyre; Meteora was taught some cool leaping frog combat maneuvers; Ellipsis got a magic ring (actually a frog bracelet) that makes his arrows unbreakable. They even got the ballista, which they gave to Chuff to use as a crossbow.
The following day the marched north. They hunted and felled a deer, producing enough rations for three days. 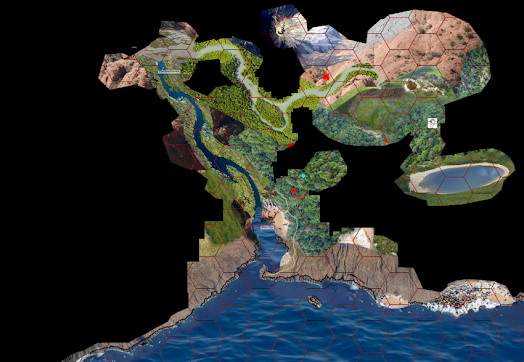 (This is the hexmap, with all the areas the group has explored (or at least saw from a high vantage point) already)
They decided to stray from the river, and cut through the forest to the north-east.
They saw some bear tracks, but not the bear itself.
They reached the river where they saw a large underwater beast the last time. Based on this experience, they decided to NOT cross the river just yet... Instead, they camped nearby. They saw a vulture above in the sky, but weren't noticed by it.
That night, during Meteora's watch, there were some sounds from the other bank of the river. The amazon sneaked out to check it out, and saw many strong lights moving from the forest uphill on the volcano. In the morning, when they discussed the event, they came to the conclusion, that this might be the transportation of the felled trees for some sinister and mysterious construction project.
They decided to cut down some trees too to make a raft, but didn't have an axe!!......
So they followed the river to the west instead, and soon found that it flowed into a marshland, and thus they found the connection of the two rivers. They turned south, and headed back to the village for backup and more tools.
To be continued!
Bejegyezte: Tamás Kisbali dátum: 7:43