This is a post about Mesopotamian roleplaying games, games that specifically take place in the ancient Near East, although often in a fictional / fantasy-influenced version of it.
Elements of Mesopotamian myth and history have been present in wargames and roleplaying games from the beginning. Lammasu as a monster/creature appears in print as early as 1975, in Dungeons & Dragons IV: Greyhawk (and you can find Shedu in D&D VI: Eldritch Wizardry (1976)). There are sections on “Babylonian Mythos” and “Sumerian Mythos” in Deities & Demigods (1980).
However, I am unaware of any early games specifically dedicated to historical or historical/fantastic roleplaying in Mesopotamia. Such existed for Egypt, e.g. 1983’s Valley of the Pharaohs. Even for game lines where “historical supplements” were released for many different eras, Mesopotamia had not received coverage (there is GURPS: Egypt, but no GURPS: Mesopotamia).
Two books were released in the early 2000’s, in the so-called “d20-era” (when the owners of Dungeons & Dragons introduced the “Open Gaming License”, allowing the publication of third-party materials building upon the game). 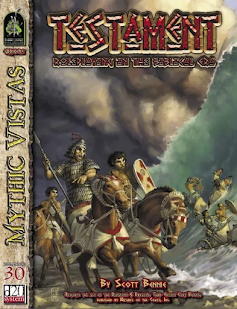 One of these is Testament: Roleplaying in the Biblical Era (2003). The book, of course, includes a lot of historically based information and game options from Israelite, Canaanite, Egyptian, and, last but not least, Mesopotamian cultures. The authors sum up their approach to the material as such:
“<…> we are striving to capture the spirit of the Bible. We’re trying to portray the general characteristics of the Biblical characters: Samson is really strong, Moses is a miracle-worker of incredible power, David is a poet as well as a warrior, and angels are great and terrifying creatures.
We interpret the source material metaphorically. In other words, the Bible doesn’t tell us that Israelites physically battled tempter devils, or sphinxes, or other mythical monsters, or that seraphs transformed into fiery serpents (although there is etymological evidence to suggest that they could), but adding these features makes the game more playable.” 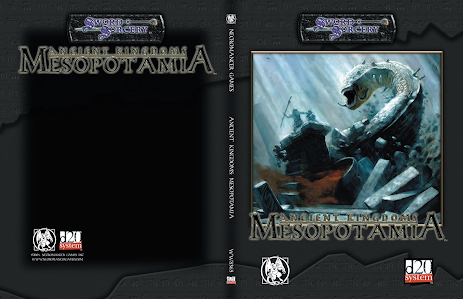 The second book is Ancient Kingdoms: Mesopotamia (2004). It’s similar to the aforementioned game, as it includes big chunks of geographical and historical information, and then presents options and mechanics on turning this into a roleplaying adventure. You all will probably recognize how Wooley’s reconstruction of the Ziggurat of Ur is used in one of the dungeon adventure maps. If Testament is biblical, Ancient Kingdoms: Mesopotamia leans more into the pulp/Lovecraft/Chariots of the gods side (“Atop the great ziggurat, on a moonless night, they called down an entity that the stone tablets named Yuthla-Nogg and described as a black wind with a thousand eyes”). 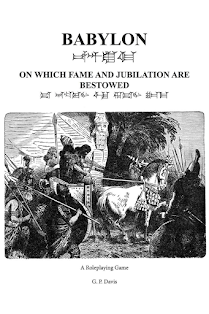 Also based on the Dungeons & Dragons Open Gaming License, but released later is the monumentally titled Babylon on Which Fame and Jubilation are Bestowed (2016). This is a very different beast. It is the self-published work of a sole author (G.P. Davis). It is very strongly grounded in historical research: the introduction states that middle chronology is used, and that the game as intended takes place in the 25th year of Hammurapi’s reign. The previous two books were more like popular encyclopedias of the ancient Near East. This game goes into scholarly detail. There is diacritics! To this background, the more or less standard elements of Dungeons & Dragons are added. There is also a second edition, which changes the game system to an original one, but I haven’t checked it out yet.
Also, do check out the solo play reports on the alea iactanda est blog! (Addendum: this game uses the 2nd edition)
And this beautiful encounter table, based on ancient lexical lists. 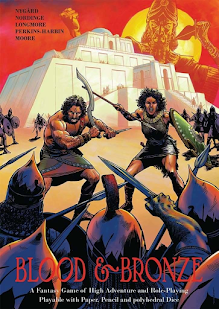 Next up is Blood & Bronze (2016). The stated intent is to present Bronze Age adventures in the pulpy sword & sorcery style, in “Mythical Mesopotamia”. Robert E. Howard, Clark Ashton Smith, and peplum movies are cited as influence. This is a “lighter” affair, that does not include much encyclopedic detail about historical Mesopotamia (its “gazetteer” is 5 pages, compared to the 150-200 pages of the aforementioned examples – but then, recent game design principles are quite different from those of the early 2000’s). 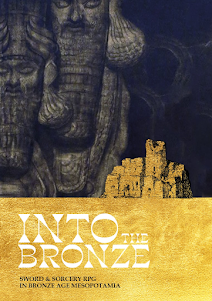 And there is another recent minimalist addition to Mesopotamian roleplaying games, called Into the Bronze (2020). Even more than Blood & Bronze it aims to create an eclectic pulp literature feel: “You and your friends will play as adventurers in a fantastic world 4000 years before Christ. Among its influences are Sword & Sandals movies, Anouar Brahem records and the Jewish Book of Judges”.
This is it for now. This is not a complete list, of course, so feel free to add or discuss in the comments.
(I posted this text originally in a facebook group dedicated to popular references to the Ancient Near East)
Bejegyezte: Tamás Kisbali dátum: 23:46 6 megjegyzés:

The science fantasy Harpist class is a character type for OD&D/BX/whathaveyouish games. It is based on the lyrists and bards from pulp fiction, who can manipulate emotions or matter with their music. See, for example, one of the protagonists in "The Jewels of Bas" by Leigh Brackett (I wrote about it in this post), and other appearances of lyres in Brackett's sword & planet fiction. I was also influenced by the description of the "Pipes of Killorn" in "Swordsman of Lost Terra" by Poul Anderson.

“It was like the snarling music of any bagpipe, and yet there was more in it. There was a boiling tide of horror riding the notes, men's hearts faltered and weakness turned their muscles watery. Higher rose the music, and stronger and louder, screaming in the dales, and before men's eyes the world grew unreal, shivering beneath them, the rocks faded to mist and the trees groaned and the sky shook. They fell toward the ground, holding their ears, half blind with unreasoning fear and with the pain of the giant hand that gripped their bones and shook them, shook them.” (Poul Anderson, “Swordsman of Lost Terra”, Planet Stories, Nov. 1951)

So basically it's a D&D bard, but with science fantasy flavor for the powers. 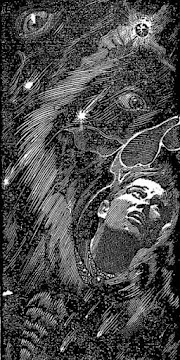