[Actual Play] An excursion into the Gardens of Ynn [5e]

I run an 5e game for some friends. This weekend, some of the players were busy, and I decided to introduce a short side-excursion for my remaining two players. So I whipped out The Gardens of Ynn, written by Emmy Allen.

The Gardens of Ynn is a point-crawl setting, a very evocatively written weird pleasure garden of sorts. Everything is randomly generated on-the-go.

It was actually quite easy to weave this into the main story of our game. Without going into much detail: the characters were about to investigate some stuff in the city park anyways; they ended up chasing a creature into an old glasshouse; and further through a portal in a huge tree into the Gardens of Ynn.

Their zero-level entrance point was an Ivy-covered Lawn. I think it's good that the first point was something more 'mundane', with just some hints of weirdness. Enough to make them want to explore further, but without slowing them down.

They went deeper to level 1, to find a Fountain with Treasure. They didn't throw in any coins, but they did salvage some interesting items and old Fay money.

They ventured deeper, arriving on level 2.
I rolled Hothouses with Nests, and it was also time for an event, and I rolled "something's empty home is found". Already a nice combination. And then I rolled an encounter to see what lives here, and came up with Glass Birds! So some of the nests had broken glass eggs in them, to foreshadow this all.

They backtracked to the Fountain (1), and found a new pathway, which led them to another place on depth level 2, the Shadow Theater with a Dead Explorer (a decaying ranger) lying next to it. I made it so that the characters' shadows were always pointing towards the center of the theater, trying to crawl away... But the characters didn't linger here for too long, and they made their saves on the way out, so their shadows stayed with them.

For the next point in this crawl, I rolled Woods, Singing, and an encounter with a Glass Butler. In my interpretation, this became a clearing with a huge Aeolian harp (a wind harp) set up in it. The Glass Butler was stuck here eternally cleaning the instruments. Lucky for the players, the Butler was in an obedient mood, and tried to serve them food and drinks from an empty tray. The players tuned the harps and listened to them, asking some questions and gaining some Ynnian insight. The Butler didn't attack and try to harvest them for food this time.

They ventured deeper, to level 4, to a place with Gear-works, and here they encountered the strange creature they were following (spoiler - an ex-wizard turned nothic, who caused some of the arcane mayhem back in their homeworld). They interacted for some time, then the creature fled deeper into the Garden.

It was time to finish up the session, and I didn't want the player characters to be stuck in the Garden, so deus ex machina style the ground split (good thing they were in the Gear-works section!), they fell through a dark void, and landed back in the park they originally left from.

Both players enjoyed this excursion, and the Ranger said that he wants to find a way back to explore it some more. A couple of weeks ago I wrote a comment on Christopher Tamm's amazing blog, Elf Maids & Octopi, which was picked as "comment of the week", and I got a gift - a small pocket-mod style one-page dungeon / zine. As far as I understand, he also posts these dungeons on his patreon. 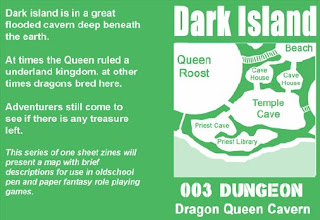 The dungeon is the lair of the Dragon Queen, located on an island in the middle of an underground lake. It's a massive rock, riddled with holes, passages, caverns and halls. The Dragon Queen is still around, but she is not the fierce conqueror and tyrant she used to be... nowadays, she is this whimsical, nostalgic creature, who wanders around her domain, likes to talk to visitors, invites them to her table (sometimes eats them, though)...

There is a very nice map with an encounter table (nowadays the island is mostly populated by lizards, gnomes and other subterranean folks). Inside the pocket-mod, there are brief write-ups of the various "factions" standard behavior, and some details like special treasure.

I like this little dungeon. It can be easily taken and used in some other context: e.g. as an "overland" island somewhere in the middle of the ocean, with the underground themed monsters reskinned as something else. Some preparation is needed to stat everything up.
Bejegyezte: Tamás Kisbali dátum: 5:06 Nincsenek megjegyzések:

Treasure is a big thing in OSR-type games. It's the incentive for going to dungeons, and the main source of XP (in gold = XP systems). So eventually, when the PCs leave the dungeon and go back to town, all the various non-magic items (gems, jewelry, artifacts, whatever) are converted to their respective base monetary value (as set by the DM / the adventure's author).

A good way to retain flavor is using a house rule:

The players can opt to "go the extra mile" when converting treasure to XP. They designate up to 5 items from their loot as "significant artifacts". The DM doesn't have to disclose the base value of the artifact. Then roll 2d6 for each item separately on the following table:


Optional rule: if the roll is a double (e.g. two 3's), in addition to the effect, the PCs attract the unwanted attention of a local criminal organization, tax collectors, other adventurers, etc.