Yesterday I started running a Mazes & Minotaurs campaign. This campaign, called Colonies & Chimeras, takes place in historical Greece, during the 8th century BC, but on the very edge of the world, where myth bleeds into reality. The adventurers lead a small group of Greeks to a new land. While the colonists build their settlement, the adventurers’ task is to explore the surrounding country (in a hexcrawl), scout out and avert possible dangers, defend the community, solve all kinds of problems.

“There are unclaimed lands at the edge of the known world. Fertile soil, crystal clean springs, forests full of wild animals and birds, rich veins of ore! It is ours for the taking! We just have to get there faster than the other Greeks of those shifty Phoenicians… Oh, and never you mind the rumors about monsters and mythical beasts… Those are just stories to scare little children.”

The three players rolled up their 1st level characters:

Then we quickly generated some basic facts about the settlers: As the adventurers are not a charismatic bunch, the initial number of colonists they had managed to attract to join the undertaking was relatively small: 40 people (including 8 warriors) in one ship, with just one specialist – a Herbalist. The patron deity of the community is Hestia (with a 2nd level priestess), and the settlers brought a beautiful statue of the goddess with themselves, eager to set it up in a temple as soon as possible.

And the game was on! The following text is a write-up of the first session:

We started with them arriving to their destination after 40 days of sailing.

A long stretch of shoreline, mostly guarded by high, ragged cliffs, with the occasional rocky/sandy beach. In the distance, deep inland, they saw the summits of two mountains and the truncated cone of a volcano. They also saw the narrow entrance to a bay. But they didn’t want to risk sailing into a bay, because they thought that it looked too much like a place of ambush, with two high, tower-like promontories flanking it.

So they sailed towards one of the wider sandy beaches, and pulled the ship to shore. Just in time, as storm clouds started gathering.

The adventurers left the ship and the colonists behind, and climbed up from the beach towards the cliffs, then headed west. They had a plan to explore a bit, and find the bay they didn’t want to enter. The storm picked up, with heavy rain and lightning. The group was in a pickle, caught in the open, with no cover. Luckily, Porphyra sang the song of Danger Evasion, so most of the group evaded the lightning strikes – except Ellipsis, who carried his spear too high, and the weapon was burnt away by a strike of lightning.

They noted a couple of natural areas: a field and a dense oak forest.

Then they arrived to a place with more rocks, and found that somebody has created a small, sandy path between the crags, leading towards the promontory, and towards a tower-like structure.

At this point Ellipsis also noticed a big vulture-like bird hovering over them, observing. It was too high, out of range. They tried to take cover, but the vulture-thing circled around and kept tracking them. Then eventually it flew away towards the north-east; and, although quite unnerved, the adventurers continued their way towards the structure. 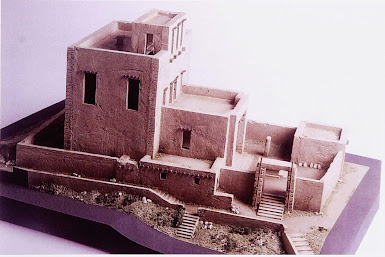 The building seemed to be built recently, and only partially finished. It consisted of an enclosed courtyard and a two-story tower with a lower building attached to it. There was nobody around. The group climbed through the half-built wall (instead of using the open gateway) , and found an altar with traces of burning on it.

Around this point, it was getting darker (but at least the storm stopped).

They wanted to explore the insides of the temple, but realized, that they haven’t brought any torches from the ship! Thus, as the lower part of the building had no windows, they could only see into the antechamber, where they saw a big statue of a man-headed lion.

“This is a game where statues come alive,” said the wise players, as the less wise player characters crossed the threshold and marched, blindly, into the building.

In the dark second room behind the antechamber, Ellipsis, who was on the lead, bumped into a wooden chest. He opened it and reached in (“I hope this is not a sarcophagus... or a box of snakes…”), and felt that it contained folded silky clothes and a couple of metal bowls.

In the meantime, Meteora, who was still in the antechamber, felt an uneasy sensation, turned around --- to find herself facing the statue, which was now alive, moving, with glowing yellow eyes.

And the guardian statue attacked. Meteora was quickly reduced to a single hit point, while Ellipsis fired arrows at the creature (with little success). Porphyra used some of her magic to heal up Meteora, but then ran out of power. So she reached into the chest, and pulled out one of the bowls: a heavy gilded silver object. Not having anything better to do, while the other two were holding back the creature, she poured some water into the bowl, and drank from it. She felt a weird sensation – that this item was no ordinary bowl, and that she shouldn’t be drinking water alone, but share wine with somebody to have a magical effect: which would be the creation of an unbreakable agreement between the imbibers.

After a couple more exchange of blows, the adventurers decided to retreat, and ran out of the temple. Luckily, it seemed that the guardian statue was bound to the building, and couldn’t cross the threshold!

The group then decided to take another route, and used some planks to construct a shaky bridge to the window of the second floor of the tower. Ellipsis climbed up, and found a dagger in the dark room above. The guardian creature on the first floor moved again, so Ellipsis climbed back out.

Then the adventurers decided to rest for the night, in one of the side chambers next to the temple. The night passed without any incidents.

On the following morning, Ellipsis and Porphyra climbed up to the tower once more, and found that the second floor connects to the lower floor via a simple ladder, that the guardian statue cannot use… They found some weird metallic tools, a rod and a triangle with markings, which they couldn’t identify. Porphyra found that these items make a good cowbell, so she added them to her musical inventory… (“this adventure needs more cowbell”). They also climbed up to the flat roof of the tower, where there was another altar with a tripod.

But also from this high vantage point, and with the day’s clearer weather, they could have a good look around.

They noticed, that the biggest danger in the narrow straight leading to the bay were some underwater cliffs: good thing they didn’t sail blindly into those…

Aaaaand they noticed that several miles north, near the bay and a river, there is a small settlement, a couple of houses, and a single thin column of smoke.

They went back to their own ship.

The settlers were angry and unnerved: while the adventurers were gone, two giant crabs climbed out of the sea and pulled away a person! (Colony population: 39… zero days since last monster attack...)

The adventurers laid out their plan: rest here for one more night (away from the shore), then sail the ship into the bay and take over the settlement.

There was a little tension with the colonists: when Porphyra played another song of healing, some people made fun of her, called her a "singing witch" that cannot be trusted. Ellipsis stepped in and reprimanded the guys. 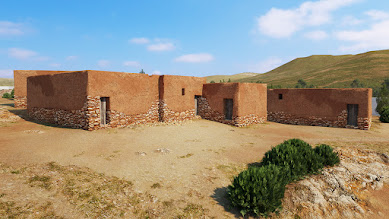 Next morning, they sailed carefully and avoided the underwater rocks, and arrived safely into the bay. The adventurers took two warriors as backup, and went to check out the village. It was a small settlement, a couple of mudbrick houses (similar in construction to the temple). But there was nobody around! The village was eerily empty.

The group knocked on a couple doors, found some wine and honey in amphorae, some furniture, but no people. They found one door barred from the inside, which they broke down. Inside, there was only a ladder leading to the flat roof. They climbed up, and on the roof the found signs of struggle, an old pool of blood, and a bow with some arrows.

So this was session 1 of the game, to be continued next week.