Ellipsis the Hunter
Porphyra the Lyrist
Buff the Warrior henchman (level 1)
Chuff the second Warrior henchman (level 0)
Romulus the semi-domesticated (at best) wolf of Porphyra
Meteora's player couldn't make it, so we commenced the exploration of the cave with two players characters and their henchmen.
The party (this time with a proper light source - an oil lamp) cautiously entered the cave. Ellipsis the Hunter checked for tracks, and found several, including prints of a single wolf and a cave lion. The lion's tracks, however, were strange, heavily impressed. Ellipsis thought it made be that somebody is riding the lion.
After the cave entrance, the passage branched into two. Romulus the wolf/dog gnarled at the left passage, so the adventurers proceeded to the right. In the next chamber they found a big eye caved into the rock. At the same time, a cave lion charged out of the left passage and attacked the rearguard. The two warriors put up a good fight, and with the arrival of the rest of the party, they managed to dispatch the lion quickly.
But there was another surprise: it turned out that the lion was not a regular cave lion, but was a half-taxidermic, half-mechanic monstrosity! 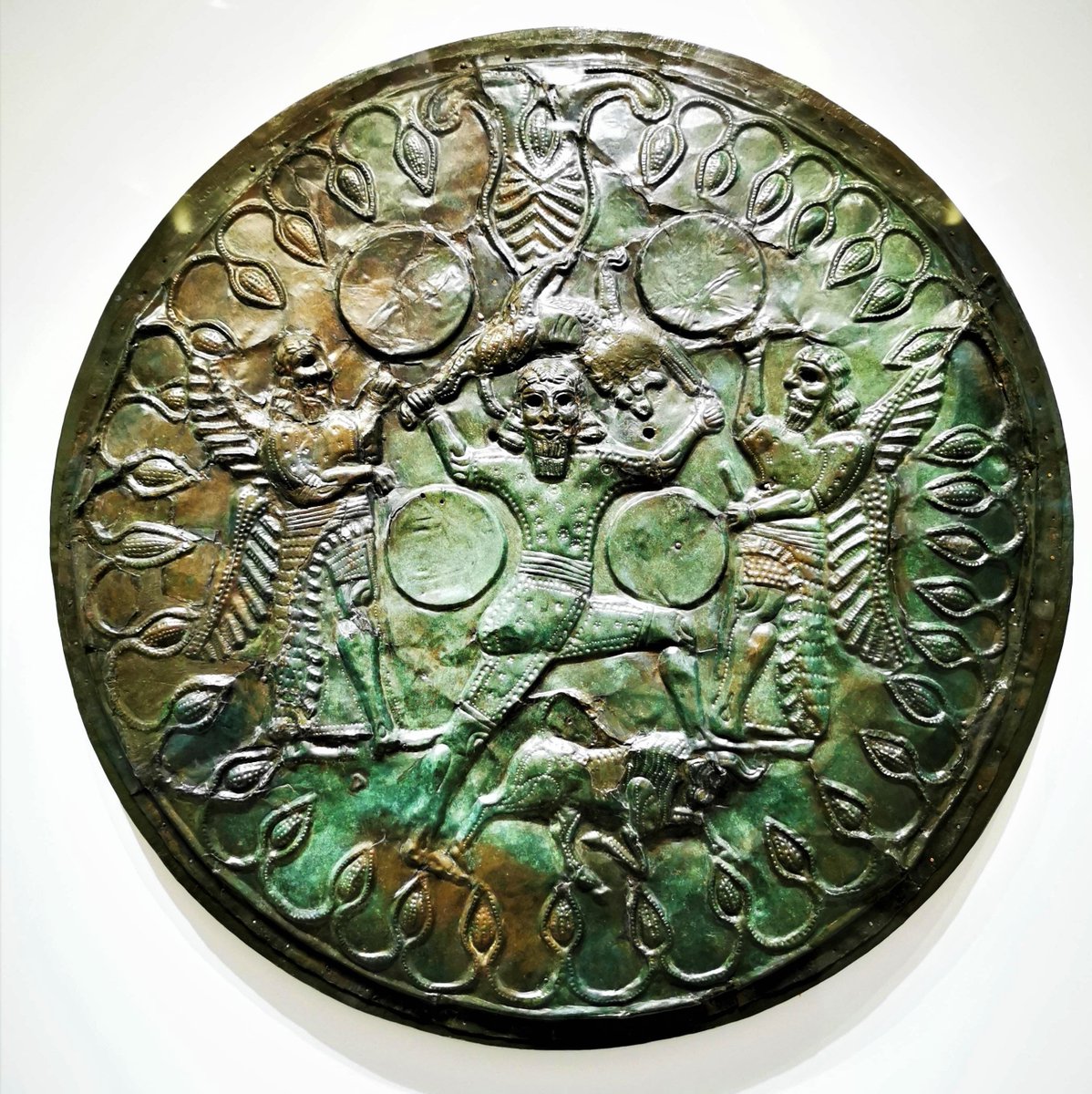 This revelation greatly unsettled everybody. But they decided to investigate the lion's lair in the left passage, and found a weird nest made out of copper wire, and two marble eggs. The lion obviously was trying to hatch these stone eggs...
The adventurers returned to the chamber with the eye, and soon they found that its pupil could be popped open. A little niche behind it hid a metallic wheel or valve. Ellipsis turned out, and they heard a click from the neighboring chamber - a dead end. They searched that area, at first without much success. However, one of them realized, that the dead end was actually an illusory wall!
Ellipsis bravely walked through, and found that a strip of dark material was crossing the passage diagonally, however it did nothing. So he stepped through, and found himself in a built area!
The corridor was built using well-dressed masonry, with smooth joins, and a very smooth floor.
The party moved over the illusory wall and moved down the corridor. It was very long, and they thought there might be more phantasmical hidden doors, but found none. In the end, they reached a place where the corridor ran into a hub, where a total of three corridors met. One of the corridors was very dark, so dark that their light couldn't penetrate into it.
Ellipsis scouted forward a bit, but almost instantly he bumped into two creatures: 5' tall pale humanoids, with but a single eye in the middle of their face! They were wearing simple dark robes.
The rest of the party stayed hidden in the first corridor, while Ellipsis parlayed with the creatures. They spoke their own language, but knew Greek as well. They spoke in a weird way, though, making illogical jumps. When Ellipsis asked if they were cyclopes, they got offended. They said they didn't like intruders. Then one of them produced a rod or wand from its robe's sleeve. Ellipsis stepped back, but eventually confrontation became unavoidable. The creature hit the hunter with the rod, which had a paralyzing/stunning effect, but Ellipsis made his save. Then the two warriors charged in, and after a brief fight, the two "cyclopes" were taken out.
The adventurers took the stun weapons, pulled the bodies into the first corridor, then proceeded to explore the not-eternally-dark passage where the two creatures came from. They found a door, but then heard noises from further down the hall.
It was three goblinish creatures, carrying javelins, investigating the noise of combat. A brief fight ensued, two "goblins" were killed, a third one captured (wrestled by Porphyra, of course!). The party interrogated it in the Barbaric language. The creature told that they were the servants of the Kings under the Mountain (the cyclopes), and they were mining rocks for them. The adventurers wanted to learn what exactly was mined here, but the creature just answered that their task was to bring big chunks of rock to ttheir masters, who would then decide which to keep and which to discard.
The prisoner led them to the cavernous mining area, which also had an underground lake (where, allegedly, the fish-folk live). Indeed, there were no veins of metals or other resources visible, just regular local stone.
The adventurers let the prisoner go, and it returned to its job.
Then they went back to the door, and slowly opened it up.
Inside was a chamber,a sort of surgery area. A cyclops was busy operating on a human male, attended to by a "goblin". Cages in the room held a giant scorpion and a wolf!
The cyclops was curious about the intruders, at least a bit, but was also annoyed that his great experiment was interrupted. The adventurers learned that the mechanical lion was one of the creations of this crazy surgeon. At the same time, the cyclops was "sizing up" Ellipsis, and told him that he looked very nice and healthy and strong... Ellipsis freaked out, and shot an arrow into the surgeon. The goblin servant tried to open the cages, but was also swiftly taken out. The creatures in the cages were killed too, just in case -- they turned out to be half-mechanical as well.
They found another door from this chamber, which led to a bending corridor. Instead of exploring it, they returned to the taxidermy room, and examined the victim on the operating table: it was a young human, but not from their village. They assumed he might have been from the earlier Phoenician settlement. And... he was still alive!! Although in a very rough shape, cut up, with parts of his body already replaced by weird clockwork contraptions! Porphyra sang the Song of Healing, to at least give him a chance.
Then they decided to retreat from the dungeon, and travel back to the village, rescuing the poor Phoenician man.
Bejegyezte: Tamás Kisbali dátum: 2:25