Times That Fry Men's Souls is a campaign setting written by Seann McAnally / Nerd Glows On. The weird historical setting lends it to LotFP, but all stats are presented in a neutral OSR style. The cover says it all: Colonial America + a probability of tentacles... I like it though how the GM can control the amount of supernatural they introduce: the book has many options for "mundane" games, concentrating on drama, espionage, Revolutionary war drama, political intrigue, and frontier exploration; but if needed, a rather hefty dose of the weird/ghastly/supernatural can be injected into this historical world.

Let's see what's inside the book! You get ~130 pages of content, with a single-column layout. There is an "old-timey" feel due to the fonts and well-curated public domain illustrations and collages. Luckily, the historical fonts don't hinder readability. 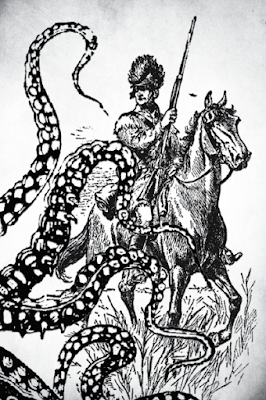 A short introduction summarizes what you get: a hexcrawl, monsters, hooks, short adventures. The author says that what you don't get is background info about life in Colonial America. This is not necessarily true: in the appendices there are 15 pages of tables with useful info (names, random background tidbits, random NPCs, locations, meals...). Also, there is a reading list in the end, so you can use those recommendations to supplement world-building. The Colonial Gothic RPG has most things covered. If you run or play "Times That Fry...", I think it's necessary to brush up a bit on your knowledge of the period, at least in general terms, to know who the factions are, what are they fighting for.

Also, bonus points for including music recommendations - this list is short (only three entries), but effective, especially the doom folk of The Widow's Ride. I love compiling playlists for the games I run, so I appreciate this part! Off the bat, I'd add Crow Tongue to this list!

An 80-strong hex crawl makes up the bulk of the book. There are two maps: a full-color at the back cover for the players, and a "control map" inside for the GM. The map is a piece of real historical cartography - great for immersion - but when in grayscale, I think it lacks contrast (the white hex grid blends with parts of the map). And sometimes it's hard to discern whether a marking on the map actually corresponds with the hex description. It's still usable, though. And you can easily extract the map from the pdf, and adjust brightness/contrast in any photo editor.

The territory is densely populated with story hooks, factions, encounters. Luckily, there is a single-page overview of the various storylines, so the GM can easily see to which hexes each narrative strain is tied.
There are also several categories of interest, e.g. lists of all hexes containing treasure, all hexes containing supernatural encounters, or all locations with military activity.
Such summaries are very important for hexcrawls. Of course, you have to test this in actual play to see just how well Seann managed to organize it, but it looks solid and useful. Perhaps it'd be beneficial to also highlight the "trigger hexes" for the storylines? An overview of these storylines and their importance for the campaign (and the consequences!) would help a lot, too. You have some page-turning to do going back and forth between hexes to learn the whole plot.

The layout is great here: one hex = one page.

Each hex has two or three things. It is not stated explicitly, but from what I understood, the first thing is something that's visible right away when entering the hex (or maybe even visible/heard from a neighbouring hex). The subsequent things are harder to discern, and are only encountered when the players spend some time exploring the hex.
The first thing is usually an encounter with people or wildlife. The encounters are quite varied, and also very interactive. Many of them "trigger" the story threads mentioned above. Some are shorter, e.g. a young doctor who asks to be escorted from one hex to the other. But there are also complex stories, arching over 4-5 distant hexes.
Hexes also contain places of interest, natural or man-built, abandoned or populated, loot, items, etc.
One hex occupying one page REALLY helps. Descriptions are terse, and easy to skim (although some highlighting would be beneficial). Stats for NPCs and creatures are summarized at the end of each entry.

The hex contents are VERY GOOD. They perfectly evoke the historical period, provide enough details, and, most importantly, hooks and things to interact with.
It's interesting to see how the author deals with hex 307 - The City of New York... Understandably, there is only so much you can fit in a single page. So there is no detailed description, but you still get two small locations, and, of course, the hook for one of the most convoluted story threads in the campaign.

In keeping with the setting's "adjustable weirdness level", these hexes only contain mundane hooks and happenings.

However, in the next section, there are ten weird tales of the supernatural that the Referee can drop on their players.

Each weird tale is presented on two pages. They are not tied to exact hexes, but there is a general recommendation on where to locate them (e.g. "close to a river"). There are no maps or mini-dungeons, though, so if a "cave" is mentioned, the Referee has to make their own.

The tales ( = short adventures, probably a session each?) are mostly dealings with a group of local populace followed by an encounter with a weird and possibly highly lethal entity. They have this distinct Call of Cthulhu feel, which is great, but the formula is a bit repetitive (arrive to hex, learn about weird stuff from disgruntled local folks, run away or deal with said weird stuff). Two tales stand out, however, which provide a different approach: one is a surreal party in an urban setting (good thing to put in that underutilized New York!); the other tale is triggered when one or more party members die.

The book closes with several tables and appendices, which I've mentioned before.

Highlights: evocative historical setting with an adjustable weirdness level, good layout and art, dense hexcrawl (there are no "empty" spaces!), plenty of hooks and stories for the players to interact with. It can be played both as a straightforward historical game, or a weird investigative horror that truly tries & fries your soul!

Overall, I really like Times That Fry Men's Souls! I definitely want to run it eventually. If you want a historically grounded campaign, with plentiful weird opportunities, you should get it too. Great for OSR systems (and especially LotFP), but certainly usable with Colonial Gothic or Call of Cthulhu too. 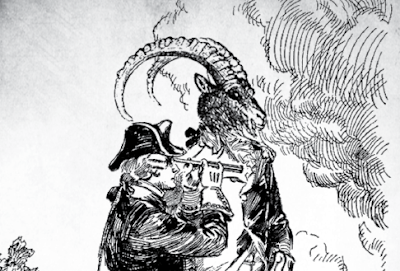 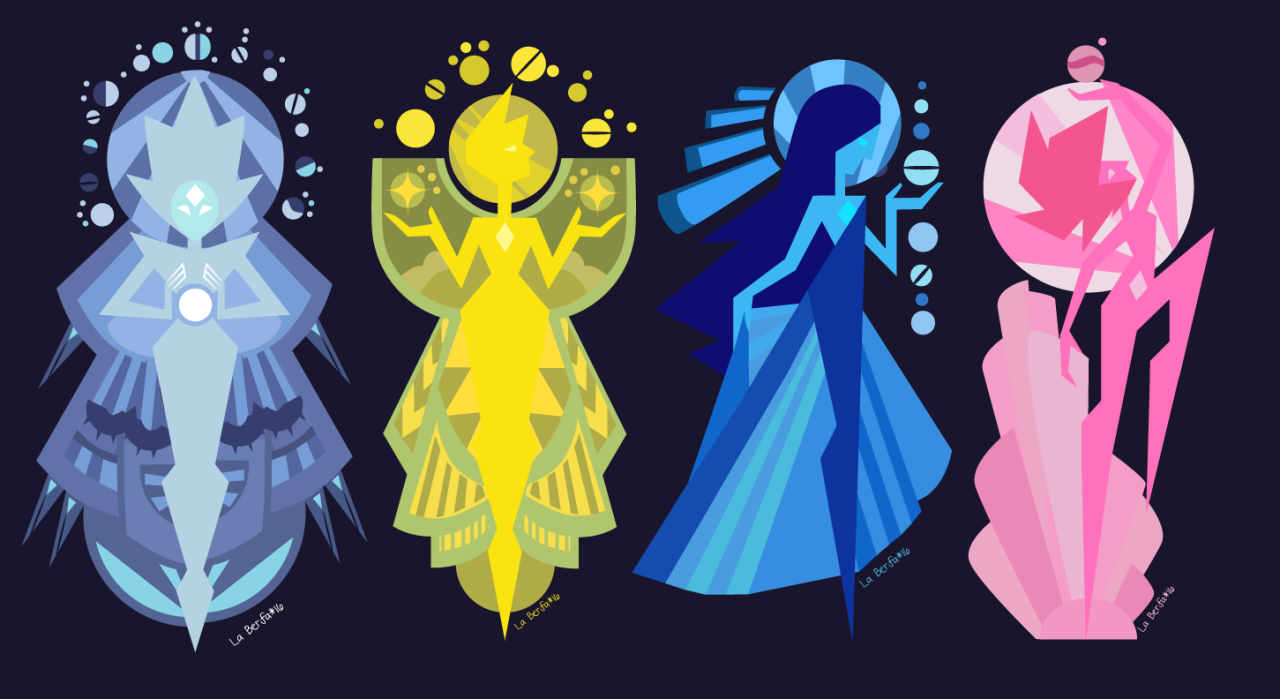 Steven Universe is great, for a multitude of reasons --- and for me it's also a good aid on portraying aloof and whimsical Archfey type creatures. In my current 5e game, the players will soon meet a Lady of the Fey. At first, I planned her to be more standard, but then I got into Steven Universe, and decided to play her as a Diamond. I reskinned her dungeon into a crystal palace and everything.

Here's a quick write-up. The extended spell list is new - I concentrated on spells that control minds or manipulate inorganic matter. The features are ripped from the Great Old One and Archfey Warlocks, with one original addition.

Your patron is a Diamond, one of the four leaders of The Great Diamond Authority, a cosmic entity of vast power. Her behavior is whimsical and unknowable, like that of the fey, but her goals are crystal clear. She grants you dominion over inorganic matter and the feeble minds of mortals. But in exchange, you must prepare your own planet for colonization by the Gems.

The Diamond lets you choose from an expanded list of spells when you learn a warlock spell. The following spells are added to the warlock spell list for you.

Starting at 1st level, your alien knowledge gives you the ability to touch the minds of other creatures. You can communicate telepathically with any creature you can see within 30 feet of you. You don't need to share a language with the creature for it to understand your telepathic utterances, but the creature must be able to understand at least one language.

Starting at 6th level, you can vanish in a puff of mist in response to harm. When you take damage, you can use your reaction to turn invisible and teleport up to 60 feet to an unoccupied space you can see. You remain invisible until the start of your next turn or until you attack or cast a spell.
Once you use this feature, you can't use it again until you finish a short or long rest.

Starting at 10th level, your Diamond delegates one of her servants to aid you. You can summon an Amethyst (as Earth Elemental, MM p. 124) or a Pearl (as Air Elemental, MM p. 124). The conjured creature serves you unquestionably.
Once you use this feature, you can't use it again until you finish a long rest.

At 14th level, you gain the ability to infect a humanoid's mind with the alien magic of your patron. You can use your action to touch an incapacitated humanoid. That creature is then charmed by you until a Remove Curse spell is cast on it, the charmed condition is removed from it, or you use this feature again.
You can communicate telepathically with the charmed creature as long as the two of you are on the same plane of existence. 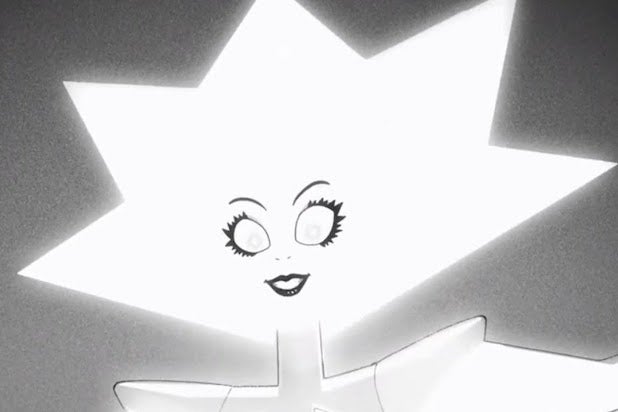 Type: Swarm
A group of small creatures that live and work together. Smaller than human.

Mental Faculty: Primitive
Just above the “Smart Animal” – is able to create art, worship gods and probably wonders about the meaning of life.

Random Features:
Single Horn: Sports a single horn somewhere on its body. Ornamental or disfiguring, this horn may have function other than just a crude mean of defense.
Smoke: It’s always surrounded by smoke. Is it a humanoid smoking a hookah? A living censer? Or a salamander breathing out billowing smoke every time it opens its mouth?
Egg Laying: Kill it! Quickly, before it lays eggs! Or is it too late…?

Peculiar Circumstances: Worshiped
There are humanoids who treat this creature as their god.

Horrifier: Destiny
It will chase you and haunt you forever. It will crawl from under your bed to watch you sleep at night. It will be observing you from afar. You’ll never be alone for as long as it lives.

Weirdifier: Strange Diet
It eats something absolutely bizarre. Sand, glass, sea water, books, bones, excrements. This is the only way it can sustain itself.

Attitude: Oblivious
It will act as if you do not exist at all, even if you attack it.

Which all combines into... 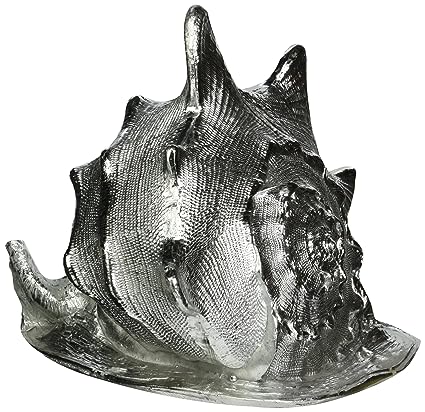 Sea mollusks. Live and prosper in the shallows. They feed on kinetic energy of underwater currents - starve in still water. For protection, they build exquisite shells around their soft bodies: there are no two identical shells and they are prized artifacts for collectors. When in danger, the creatures hide behind an ink-cloud.

Pearl divers worship these creatures. They know that each single mollusk is just an extension of the Kelipot Sovereignty, a terrible cosmic entity. Some people who come into contact with a shell become marked by the Sovereignty. One day, the Kelipot will arrive to Earth, and the Marked will prostrate themselves before it. The rest will be consumed by the Ever-Shell.