Talk to Transformer is awesome. I already collaborated with this text-writing neural network to create a dungeon adventure, called The Tomb of the Daughter. Nowadays I am using Transformer to create hex descriptions. It started out when I fed it some fragments from Carcosa... then it became pretty much its own thing. I'm slowly compiling materials for a post-apocalyptic science fantasy world. It's fun. It's also much harder to control than just the dungeon. I try to edit as little as possible, and most text still comes from Transformer's outputs, but I have to link them together on the editor-level so that it makes more sense. I'm also going deeper and generating mini-dungeons for a couple of hexes.


The hexcrawl has humans on the rainbow specter and more (the heritage from those Carcosa prompts), but also dwarves, elves, insect people...

A handful of examples:

Trolls of the monstrous Trollpaw tribe appear on the western shore, fighting together to control a spring of seawater.
This spring has been known to grow more dangerous by nightfall. The spirits wander the area looking to drink, and cause problems for others in the night. It's a curse from a deity who made this particular spring; at night it contains powerful acid which breaks down barriers to spirits.

CAVERN OF THE KUPO

The hex is inhabited by a race of reptilian humanoid insects known as the Kupo.
The Kupo have very sharp wings and no tail, though they do have a very sharp sparrow-like mandibles. Their eyes are black, and they resemble a bird's, and are shaped like what looks like a long tail. They are usually accompanied by drooling, wingless monkeys.
They live in a vast underground cavern that reaches beneath the ocean. The Kupo are generally quite peaceful, but their presence causes alarm to the other races of the underground. The Kupo sometimes use traps to capture monsters and eat creatures found in their tunnels. They eat the most interesting things, including humans.
The Kupo are very fast, able to fly long distances without the use of their arms.

A small, ancient, magical enclave of Dwarves and Elves sits in a small circular cove called Dromund Kaas. Some of their numbers are fugitives from King Kommr. King Kommr was feared because of a smallpox epidemic that had plagued his country, and Kommr's sons were blamed for it because they carried the plague with them.
The inhabitants of Dromund Kaas are known to lurk around the island with their strange magic, and when they can, they travel through the mountains and into the interior of the island in search of treasure.
The place is guarded by an old-style swordswoman named Aelian with a mysterious curse: she was killed by a magical dagger sheathed in her heart, but she is very much alive. To kill her, one must use this enchanted dagger.

The ruins of a small town, whose inhabitants were all murdered at birth.
The current resident of the ruins is a monstrous, grotesque half-goat. The half-goat lives in secret in a small, enchanted cave made of stone. It feeds only on living humans and has been so for centuries.
The half-goat has a human face that hides itself from its eyes but is able to see through humans and their clothing. Its hair is black-like blue, and it is able to grow new parts of its body every so often.

1. FROZEN PITS The first chamber is located on the northern side of the cave, just beyond the entrance. Inside the cave are six gigantic pits. Here in the first pit, a human corpse lay frozen for months, until its bones became stuck to a frozen ice block. It was left to decay there for so long, it was nearly entirely gone as of the last time it was dug up.
The corpse is inhabited by a bloated redhead humanoid, who we don't know if it is human, or if it is a creature of the dark. It looks vaguely human in that form, but this thing has no eyes or ears. And it's talking. When it's talking, it's speaking in a different tone. The creature gives this weird, creepy hum. It's almost human-in-a-possible-other-form thing, but it's a lot tougher. Its mouth is wide open, almost a mouth-like gape. The creature attacks with one or both of the following attacks: A slow, stabbing growl from the top of its head or a piercing, piercing growl from the bottom of its head. It wants nothing more than to see its own reflection in the water and then see if they can trust it.

2. TREASURE CHAMBER The second cavern is also located on the northern side of the cave. This is the oldest cavern in the entire Half-goat's world. This is also where a young Ogre was killed, although he died from his injuries, rather than from frostbite.
The half-goat’s treasure is hidden in the second cavern:
a. A stone ball filled with dark energy which causes everybody to bleed profusely, a crystal tablet contains blood plasma to control the body's natural defences (from heat, cold/therapeutic radiation and blood pressure) and the ability to stop a virus from spreading if implanted into a body;
b. a book of magical lore about a pair of wizards, each of which has developed a certain form of mind magic and which will also have a particular ability in the area of a given time period, and will also know how to summon spirits and other magical beings that work in those areas. The book ends with an interview with the two wizards.
c. a wand of invisibility and a scroll of silence.

3. REGENERATION PITS The third chamber on the other side is a narrow corridor that must be crawled through, with one wall blocked off. In the third chamber there are nine gigantic pits, filled with ichor which is dried out, ready to receive water. The half-goat submerges itself into these pits to regenerate. [Monster] A Hybrid Beast of Ynn

Long time, no post... So here's a random monster, straight from the Gardens of Ynn! With a little illustration. 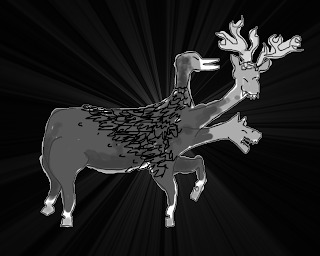