There is this tendency, that I tend to play video games mostly during times when I'm SWAMPED with tons of IRL stuff and work... They are a great way to relax and to procrastinate. To write tabletop RPG-related stuff or to play, you need to be able to concentrate more; while computer games can be played for full effect even when tired. 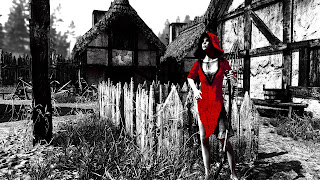 The whole game is presented in grayscale, with red accents. It seems kinda gimmicky, but it really adds to the whole atmosphere. There is an option to colorize the graphics, but I prefer the original b&w world (you can tune the dark & light balance, contrast, so it's not as heavy on the eyes as you would expect).

You fight using period weapons: bows, crossbows, pistols and muskets - these last two deal high damage, but reload times are very long, a nice realistic touch. Usually you only get to fire each gun once per combat... 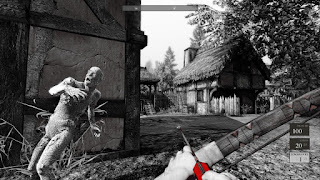 You slowly work your way through the game world, fighting possessed Spaniards and flaming Savage Braves (this game is 'colonial' in many ways...), investigate clues scattered around the map, try to learn what kind of evil possesses the land. Sometimes you have to enter into the shadow worlds, a dark parallel dimension, which allows you to interact with the flipside of this horrorshow. In this mode, you can cleanse objects and chat with the spirits of the deceased.

Quite an engaging game, overall, so I really recommend it.
Bejegyezte: Tamás Kisbali dátum: 4:24 Nincsenek megjegyzések: