«««¶¶
A swamp creature, vaguely reminiscent of the Creature from the Blue Black Lagoon. The description is short but pretty evocative, I like that: "often hide
under the surface to leap at their surprised victims before tearing them to pieces" - gives a good idea for an encounter.

««««¶
A classic! I can't say anything bad about the basilisk, and not just because I'm petrified of being petrified. And I like the fact that it's kept as a middle-sized monster ("wolf-sized", to be precise). There are many bigger serpents, but this cunning fucker is awesome in its own right.

««¶¶¶
Bears are good to have around. I wonder if the OSR's beloved "Just Use Bears" strategy is applicable to M&M --- to a certain extent, maybe, you can take one of the Bears as the baseline "burly monster" statblock, and add in one of the "modular" monster powers the Mazes & Minotaurs Maze Masters Guide has on offer.
But on the topic of proper bears in the context of Mazes: perhaps they take a second (or even third) place to such beasts as lions, wild bulls, boars.
The Compendium offers two "standard" types and a polar bear.

Mazes & Minotaurs, by the way, has a pretty good way of creating new monsters, a modular system that lets the Maze Master pick special features from a list, sum it all up, and then calculate experience rewards. It's not a quick system, but overall quite interesting. It is detailed in the Maze Masters Guide. So generally if you can't find the monster of your dreams in the Compendium, you can try and create it using the guidelines.

The Maze Masters Guide is also important, because that is where all the monster special powers are explained in detail. This is maybe a bit of an oversight :( Because unless you remember how exactly a power, say, "Crushing Missiles" works, you have to find it in a different book. I made a print-out for myself for quick reference, maybe I'll post it at some point.

But let's get down to business... All the creatures beginning with alpha letter "A"!

A quick homebrew spell, before the summer ends...

A group of 2-7 targets (which might or might not include the caster) enter into a blood pact. Each participant pours 1 hit point worth of blood into a chalice, then each participant drinks from it. Afterwards, for the duration of the spell, they can communicate telepathically, regardless of distance. To send a message to one or a select few participants, the sender must concentrate (which counts as an action); message heard by the whole group do not require concentration.

Each participant must also save against Poison, or possibly suffer a malady (d10). The spell works as intended, regardless of the save’s result.

Captain Ahab's Leg posted a wonderful evocative system for generating unusual encounters based on Tarot cards. I love random content generation, I have a Tarot deck, so... here we go!

The Form: Eight of Pentacles

A craftsman chisels pentacles on golden discs – perhaps these creatures (because there are several of them) are constructs.

The Human: The Fool

Perhaps these monsters can be underestimated at first…

…but then they present a significant threat. The image shows Death as a mounted knight. A high priest in a tiara stands on the ground before the knight. Maybe praising him, but maybe trying to barter with him. In any case, the knight towers above him, subdues him just as he’d subdued an enemy previously. So perhaps the creatures have some sort of awe-inducing mind control power.

The Larva: Six of Wands

The wands are carried, not mobile on their own. In their initial state, the creatures need an outer force to propel them forward. Maybe tumbleweed? They roll in, surround the enemy, and then build up into something unified and bigger.

The Pupa: Queen of Swords

Majestic and bellicose… But the Queen sits upon a throne, doesn’t fight. She towers over the enemy, and prepares to unleash the final attack.

The Imago: Nine of Pentacles

Pentacles again, but at a higher value than the Form, so I interpret this as a growth in power. The image shows a falconer, so maybe the great monstrous attack (the “awe-inducing mind control”, see above) is a swift, targeted thing.

An abandoned workshop, eerily silent, dead bodies lying around it – no evident cause of death. Inside lie eight golden discs with pentacles engraved on them. A priest kneels in the middle of the room, mumbling “please don’t hurt me, oh most magnificent one… please don’t hurt me!”

The priest suddenly snaps out of the condition and starts arranging the discs in a specific shape.

Third Encounter (Nine of Pentacles, Ten of Wands, The Judgement)

A force of magnetism starts pulling together the discs, they gather, lift up from the ground, and form a sphere mid-air. They shine gold and bright, majestic… And now one person of the party is struck with awe – they must serve the sphere.

Wrote a small adventure today! It's set in an old mine, which is sort of a classic trope, but there are also a couple of interesting rooms and twists and whatnot. And the group might end up with a potentially lucrative mining operation (rules for running the business included). For low-level characters (2-3-ish). Stats are generic "OSR-isms", so you can basically use it with any system that has hit dice. 8 pages, 16 rooms...

I used Michael Raston's wonderful "Generic Room Stocker" tables for the title, one of the monsters and to get started with some of the rooms, then the rest really just wrote itself. It was fun.

In hindsight, I should have made the dungeon map less dense, space out the chambers a bit more, give them some breathing room... but then, at least it fits on the page nicely :) 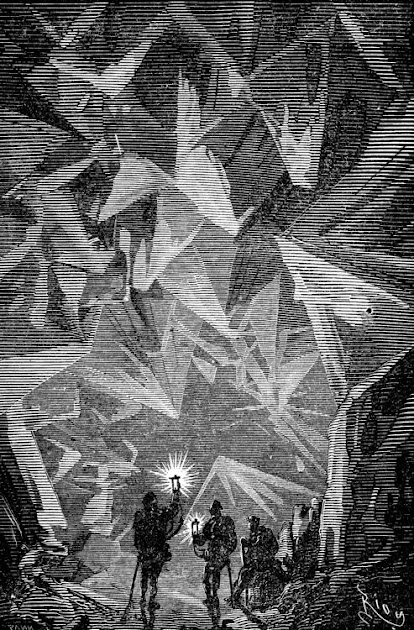 I expanded the demonic True Name generator. Now you can roll domains of power, spells, and unique physical manifestations for the entities! And I wrote up a Diabolist class (for LotFP) that calls up and binds such demons (they basically act as the spellbook of the summoner).

The project is loosely based on The Lesser Key of Solomon, but instead of the high-level Dukes and Marquises of the demon kingdom it concentrates on the "footsoldiers" and "officers", the ones that a diabolist has a chance to summon AND control. I tried to strike a balance between evocative historical flavor and playability. 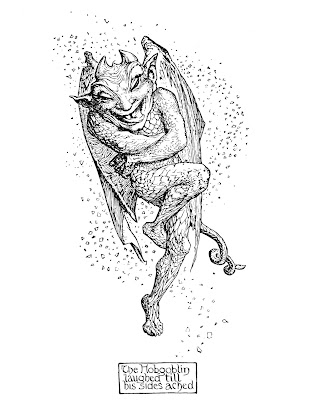 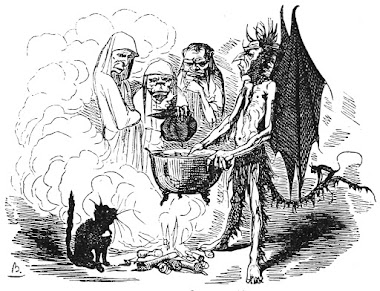 And here's twenty of them: