A third (and for now - final) venture into the Stygian Library!
You can also read part one, part two.
Once more, I kept some of the basic room layout, but re-rolled Details, and randomized any new locations. 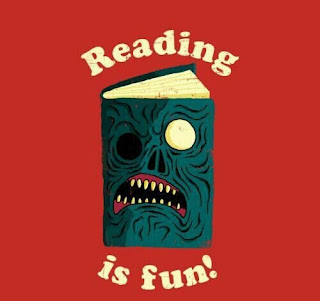 After the unsuccessful trip to the Library, the adventurers recuperated for a week, and decided to go back. And this time, they brought in a new team member as reinforcements (i.e. I had three players):
Krulo the Goblinboy, Elf 1 (former side-show attraction, former thief's apprentice, current free elf)
& Hurley the Laborer (retainer)
Machteld Mercki X, Magic-User 3 (Sorceress Supreme)
Ishimura Kobayashi, Fighter 1 (Machteld's bodyguard)

Downtime activities: A cousin or uncle of their previous laborer came to visit, demanding compensation for his beloved relative's death. Krulo, Machteld and Ishimura successfully avoided him - at least for now. No carousing or spell copying - the group was out of money. Krulo hired (and named!) a new laborer: luckily, word hasn't spread yet that "these adventurers kill retainers".

Back to the Stygian Library they went! Their goal was as previously: to find a valuable book on alchemy to sell to a rich patron.

0: Mausoleum + Vault
The Librarians took notice of the robbers' frequent comings and goings! The two regular doors leading out from the Mausoleum were replaced by a reinforced vault door (no more stealing oriental rugs from the tea room!) and a strong portcullis. After some hesitation, the group decided to take a road yet untraveled, and climbed up to reach the ventilation system of the Library.

1: Boiler Room + Too Small
The narrow duct took them to a hot and misty boiler room, where they could barely move. Wisely, they decided to NOT wait for the Ogre Spiders that usually reside in this area, and pressed forward.

2: Calculation Engine + Glass Tubes
The adventurers have seen some weird machinery in the Library before, but this one was new, a room full of turning cogs and gears, manned by two White Librarians. They approached cautiously (because the previous White Librarian they met tried to blind them), but these librarians turned out to be friendly and helpful! Their machine was a great Calculation Engine, that will one day hopefully replace the clumsy paper-based catalog of the Library.
By inputting a couple of questions, they adventurers learned some information about the alchemy book they were looking for. Krulo also tried to input a question about the identity of her mother, but the cold-cold machine had no answer for that...
While working with the engine, Machteld noticed something tugging at her backpack - and turned around just in time to see a looooooooooong and trying to snatch her spellbook!
The appendage (about 15' long) was quickly pulled back behind one of the towering machines.
The Librarians explained that this was the Snatcher, a mischievous creature of the Library, that steals things. The adventurers checked their bags, and found they were missing several items, including the trusty fire poker Krulo got from Johnny before Johnny died.
So they asked for permission to fight the Snatcher, which was granted - as long as they don't hurt the calculation engines!
An ambush was set: they returned to the machine, but left out some of their belongings as a lure. And soon the arm reached out again from the shadows - and here they all attacked!
The creature (a Bandersnatch) screeched, tried to retreat, but was cornered behind the engine stacks. Prajna shot at it with her sling, but missed, and the slingshot got stuck between two cogs, threatening to short the engine. Krulo almost got his fingers chopped off when he fished out the snag from between the gears... But at least they avoided the anger of the librarians.
The fight went on in the meantime, with Ishimura, Machteld and soon Prajna now going up in close combat against the shadowy creature. The Snatcher used its long arms to choke and slap them around, then when it felt overpowered, it grabbed one of the tubes on the ceiling, and jumped op high.
Ishimura, brandishing his magical spear, however, could reach it, and delivered a final blow.
The glass tube the creature was holding on to shattered, and black ink rained down on everybody!
But at least they retreived their belonging - and more! - a lacquered box containing ancient Chinese coins worth a LOT of money.
Before anything worse could happen, the adventurers proceeded to the next room. 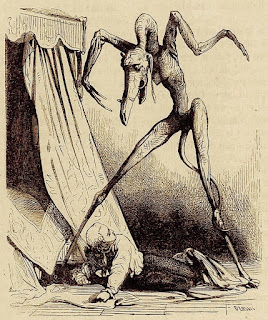 3: Statuary + Glass Lamps
...which was a statue gallery, with very detailed marble sculptures. One statue depicted Rudolf II, the previous owner of the book they were looking for. A brass plate informed them that the alchemist Emperor donated his personal collection of books to the Stygian Library. Prajna touched the statue and asked a question about finding these books, and she was hit by a vision (her forehead ached like when eating ice cream!): she saw a set of book with special red leather bindings.

4: Spider Trapdoor + Lamp post
The next room finally had actual BOOKS! Lots of them, with labyrinthine stacks. They band split up, and started checking shelves to see if they have any books with the red bindings. Suddenly Machteld cried out - and disappeared. She just vanished. The others started searching for her, and noticed that the cobwebs and dust on the floor were disturbed in one place, and found that under the wooden floorboards there was an empty space...
They carefully pried it open --- only to be attacked by a spider the size of a small elephant!!!!
The spider already had paralyzed Machteld with its poison, and now was striking at the others with its mandibles. It attacked - then retreated back into its hiding hole in quick succession, then repeated the same move again and again.
Prajna hooked her whip (yes, she has a whip - she is a bit of an Indiana Jones character) around Machteld leg, and started pulling her out from under the spider ---- breaking the poor unconscious sorceress' ankle in the process...
The others attacked the beast with all they had, but it proved to be quite an opponent. Krulo helped Prajna hoist up Machteld from the space under the floorboard.
Ishimura decided that fighting the creature was of no use, and instead wanted to trap it. He convinced the scared laborer to help him: when the spider retreated once more into its hiding place, Ishimura and the laborer toppled a heavy shelf, blocking the spider's trapdoor. Good thinking, fellas! Then they toppled more shelves, just to be sure the spider stays down, and quickly moved to the next room.

5: Printing Machine + Gas Lamps
A printing machine, automated, currently copying a book written in Lengian hieroglyphs (which Prajna could actually read!). The original book was placed into a special slot on top of the machine. They adventurers screwed around a bit. First they replaced the book with a silver coin - the machine started printing the coin's image on paper (so many portraits of the Queen!). Then Krulo copied his hand, of course. Prajna joked about copying someone's butt, however she wasn't ready for it just yet.
While they were fooling around with the xerox arcane machinery, something strange happened. The air started to vibrate around them, and the spellcasters (Mactheld and Krulo) felt as if something was trying to intrude their minds... Then a couple of objects disappeared around them... Machteld felt that one of her prepared spells was now different, but decided not to try it...
Ultimately, they decided to move on.

6: Phantom Databanks + Turning Gears
More machines!!!!! What happened to good old fashioned books?!
These machined had glass jars slotted into them, each holding a moving, swirling, glowing white mist.
The contents of one of the jars became noticeably "agitated" when the characters entered, and Krulo, Machteld and Ishimura felt strangely drawn to this jar. They decided that it must be containing the soul of their fallen comrade, Johnny Tealeaves, who died in the Library...
Before touching the jars, they searched the room more thoroughly, and found a mysterious rare book, written in the language of Leng, which, if read, would be equal to being initiated into a mystery cult!
After this, they went ahead and unscrewed the glass jar that maybe contained Johnny's soul, and took it with them....

7: Auditorium + Vault
They entered a classroom, where three skeletons in coveralls were cleaning up after an alchemy lesson! Alchemy, finally!
One of the skeletons was quite the conversationalist, and confirmed that indeed the glass jar held a soul of somebody who died in the library. He also told that the Grey Librarians were capable necromancers. He explained that in this auditorium a lecture was held by a long-dead famous alchemist, whose soul was captured by the Librarians and now somehow made to give lectures to students.
Among the books that were scattered on the table, the adventurers finally found the exact one that they were looking for! Turned out, this book was the opus magnum of the alchemist who delivered the lecture.

The adventurers quickly snatched the book, backtracked, and exited the library - this time, they managed to not get killed (even their retainer survived!!), and also found plenty of treasure!

PS: Also, when they got home, and Machteld checked her spellbook, she found that a completely new spell appeared in it - it must be the result of that strange sensation she experienced back in the Printing Press room! Krulo entered his memory palace (Elves in this game don't have spellbooks, but meditate in a special mental place), and also found the strange spell inscribed in it - so now two characters hold the arcane power of Vanish! 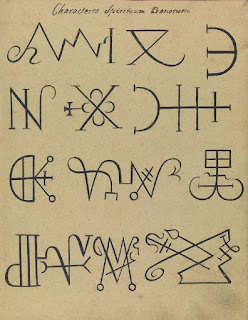 [Monster] The Bulbous Ones, for the Harry Clarke Project

This is an offering for Emmy Allen / Cavegirl's Harry Clarke Bestiary Project. 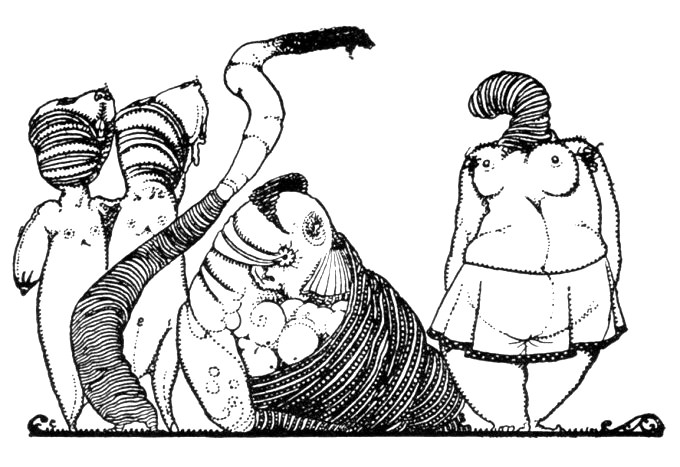 Here they are, the Bulbous Ones: Fletcher, Gambi and Radish. Leeches born from the primordial soup, three minutes after Creation, everyone’s younger siblings and servants. They speak the Ur-Language, consume the darkest secrets, and spew forth even darker ones.

Go out at night to the swamp, inhale the stench, dig a hole, and whisper a dark secret into it. Then the Bulbous Ones appear, and serve their summoner for 3 nights in a row. At the end of each night, the summoner must dismiss one of the three by giving it its coveted object. At the end of the last night, the summoner must appease the last one with the blood of an ox before dismissing it with the final gift.

Fletcher was three, then two, then one. Sinuous bodies coiled together. Can see through walls and into other dimensions. Fletcher’s coveted object is twelve twigs, eleven plums, ten ice shards, nine grains of rice, eight breaths of fresh air, seven kisses; all crushed in a mortar and fed to a pig.

Gambi smiles and bubbles. The smile is the smile of knowledge, as Gambi remembers all the secrets that were ever whispered to summon the Bulbous Ones. Gambi’s coveted object is an ivory chair with five legs.

Radish moves through the air with peculiar grace, in a dance akin to the flow of water. Traces magical resonance. Once traced, the resonance can be manipulated, replicated, consumed. Radish’s coveted object is a crystal that grows under your molars.