This week we resumed our barbaric sword & sorcery game.

The Fighter (Max) and the Magic-User (Hiram) rested a bit, bandaged their NPC friend, the Specialist (Ludwig), then decided to venture deeper. The next level of the tower was partially "flooded" with earth through the windows (as the tower sank into the ground). When the PCs passed by, tendrils burst from the window openings and paralyzed the Magic-User. The Fighter cut him free with his ax (true barbarian style), then they ran into a tunnel through a collapsed part of the wall.

They ended up in a small cave system, formed by collapsed buildings, rocks, etc., the ruins of a sunken ancient city. Most of these tunnels were now inhabited by fungi and yellow fluorescent slugs. They found the skeleton of a humanoid, albeit with the head of a crocodile, squashed under a fallen block of stone. They took the skull, because why not. Further down they found a small room, which used to be the crocodile-creature's sleeping place. A different tunnel took the players to a cavern with a subterranean lake. On the other side of the lake they saw the facade of a magnificent building.

Unwilling to enter the water, the Magic-User used Spider Climb to cross the ceiling and fix a rope to the facade. I described the effect of the spell as something akin to the "spiderwalk" scene from The Exorcist. The Magic-User's contorted body creeped out the Fighter big time.

Behind the facade they found an ancient archive, with racks full of baked clay tablets.

The shimmering stroboscopic figures from sessions #1 started to appear again, this time for longer periods. Then the players entered a big hall, which had an altar of sorts, with a big pulsating crystal in the middle. Standing next to this crystal, the ephemeral (almost holographic?) people could maintain their visibility in this world... 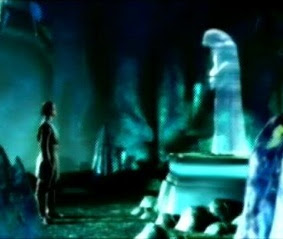 These ghastly figures turned out to be the last echoes of the ancient city, kept "alive" by the crystal's force. They communicated telepathically with the PCs, and were bent on keeping them underground, to ease their isolation... They launched a nerve-wrecking mental assault, when the characters tried to remove the crystal. In the end, they managed to come to terms, and the Magic-User vowed to re-create the crystal altar somewhere else, before it gets destroyed under the ruins of the ancient city.

The players will now return to their hometown. To be continued.

Played with two friends - one of the with some experience, the other totally new to RPGs. We share a love of Conan, horrors & experimental metal so we settled upon a sword & sorcery type game.

I rolled up some pre-gen characters for them. They picked a Fighter and a Magic-User. The pre-gen Specialist was brought in as an NPC, to round out the party. To make introductions quicker, and to be able to show as varied an experience as possible, we agreed that the characters already know each other, and that they are adventurers / treasure hunters. They live in a city called Agad, which is situated right next to the Dead Wastes, an ever-changing land of sand, rocks, monsters and ruins.

They ventured into the Wastes after hearing a rumor about a recent storm clearing out a patch of volcanic sand and revealing an ancient ruin. They found the ruin, which turned out to be (at least its visible part) a hemisphere buried in the ground. Unfortunately, their rivals, a small group of adventurers led by Tarsus the Rat got their first. We spent some time making up a story about Tarsus, who used to work together with the players, then betrayed them. The players hid behind a rock and decided to let the Rat enter the ruin first. Then they followed into the building a bit later. The structure turned out to be the top tier of a huge tower, an ancient structure, which had either sunk into the ground, or was buried by sandstorms.


The players explored the first room, found some artifacts, then eventually encountered the rival party. One thing led to another, and it all turned into a bloody and quite deadly fight, with all the rivals dead, the Specialist reduced to 0, and the Fighter and M-U both reduced to just 1 HP. During the combat scene, all characters experienced something weird: shining humanoid figures blinking in and out of existence in the peripheral vision...

We stopped here. It was a fun session, something we will continue next week.
Bejegyezte: Tamás Kisbali dátum: 15:39 Nincsenek megjegyzések: Dark Magic in New Orleans: Death on the Bayou

Long time, no post... But that's how it usually goes. 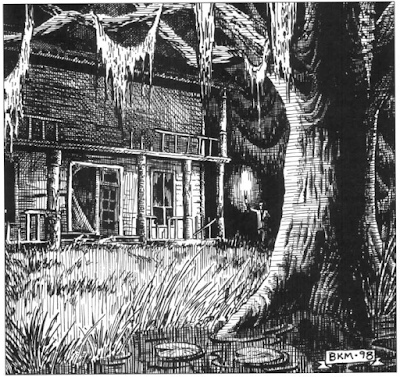 I'm always on the look-out for swampy RPG stuff, and came across an interesting piece, Dark Magic in New Orleans: Death on the Bayou, by Randy Richards, published in Dungeon (#71). It's an adventure for Mask of the Red Death, the 1890s century Ravenloft / Gothic Earth setting.

The players are thrown into the murky waters of voodoo, alligators, and ritual murders.


The usual suspects are present: the adventure's background draws heavily on historical Voodoo practitioners such as Marie Laveau and Doctor John, who also seems to be channeling Dr. Curt Connors / Lizard from Spiderman... albeit he relies on dark magic, not science.

I even found an Actual play of this on youtube, by people who can be familiar from the Fantastic Dimensions roster. Ran using LotFP.
Bejegyezte: Tamás Kisbali dátum: 10:17 Nincsenek megjegyzések: