Recently I've ran a short session of LotFP, using ideas from A Field in Lorraine as the setting. It wasn't a spectacular session, because most players were tired after work, but we still wanted to get together and play a bit.

The characters are traumatized mercenaries in the Thirty Years' War, who are heading back home. There's a weaponsmith/engineer who was buried in a tunnel for some time (Specialist), a soldier who was burnt by quicklime (Fighter), and a mercenary who dabbles in the black arts and killed off his own platoon by summoning a demon he couldn't control (Magic-User). 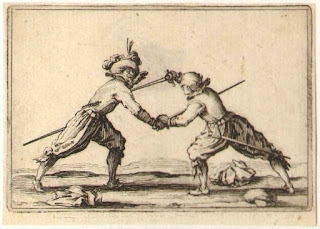 The players first encountered a ruined village. One of the houses was inhabited by a lone woman, who kept everything in order and cooked meals for the characters - but it turned out that she thought that they were her long-lost husband and children. I wanted to include this small scene to emphasize the inhumane and sanity-wrecking nature of the setting.

Then the characters met two noblemen and their entourage, who turned out to be high officials of the Church, sent to investigate the case of mass stigmatization in a near-by village. The players traveled together with them to that village, then stayed at the inn for the night. The village had the heavy odor of chemicals hanging above it: the players soon learned that its source was the tannery. The locals were all discussing the miracle: the Five Sacred Wounds have appeared on the bodies of several villagers. 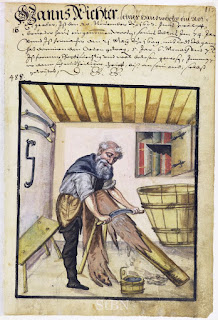 In the inn they were approached secretly by a local merchant (and owner of the aforementioned tannery). He said that he was afraid that the clergymen, who are also infamous witch hunters, will investigate the miracles, and then go after the rich people of the village, accusing them and their families. He said that this took place in many other places beforehand. The players agreed to move to his house and act as bodyguards while the witch hunters are in town. The next day they followed around the witch hunters a bit, while they visited the houses of stigmatized people. 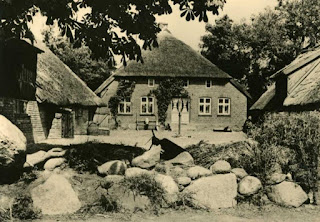 We finished at this point, the session serving basically as an introduction. The tone was set as I wanted, but, of course, the lack of action is always a bad thing... Something you always have to keep in mind when GMing!
Bejegyezte: Tamás Kisbali dátum: 5:38 Nincsenek megjegyzések: