Form a shield wall and approach the third letter of the Compendium: "C"!

We open with a couple of chaotic "C" monsters. The Cacodemon (basically a catch-all term for malevolent spirits) is a poltergeist, immaterial and with a bunch of psychic powers. It's an interesting enemy, because it awards relatively few Glory Points (experience points for Warrior types) but a BIG BUNCH of Wisdom Points, so Sorcerous types can benefit greatly from defeating this arcane menace.

Flesh-devouring chaotic horror... Good for the depths of the underworld, but not very Greek- or mythical flavored.

Ancient psychic turtlefolk. Wise and benevolent. What makes them interesting is their role in the default setting: their once prosperous civilization was destroyed by the Serpent Folk, so they are sworn enemies. Mazes & Minotaurs, as I've mentioned before, places a strong emphasis on such factions.

I'm not too keen on this one, but I like the added detail that it is a fungoid creature! Only usable for aerial adventures. For those, I guess, it's a good choice. Gives me an interesting idea though: maybe a region suffers from dangerous spore rains, so the adventurers have to get airborne and defeat the clouds?..

Okay, we all know this classic! Let's get stoned petrified! Hang your head low! Take it away, Pliny! "an animal of moderate size, and in other respects sluggish in the movement of the rest of its limbs; its head is remarkably heavy, and it only carries it with the greatest difficulty, being always bent down towards the earth. Were it not for this circumstance, it would prove the destruction of the human race; for all who behold its eyes, fall dead upon the spot"

Centaurs are also a playable character type in Mazes & Minotaurs. The Creature Compendium lists useful stats for the standard Centaur NPC the party might encounter and THEY BETTER ENCOUNTER CENTAURS, I mean what's the point of Greek myth inspired roleplaying if you are NOT encountering centaurs?!
And when the standard centaurs get stale, you get...

AKA more barbaric centaur, female centaur, wise centaur, archer centaur, centaur-satyr hybrid.
They are okay, I guess. I don't use the Centaurides, for me it's much cooler to have centaur males and females be equal in ferocity. Also, one of my centaur NPCs is Boudica, so... you get the gist.

I don't always like it when a individual mythological creature (a singular "named" entity) is turned into a monster type, but in this case I think it works. Multi-purpose three-headed hound dogs, often summoned by evil sorcerers. A good mid-tier challenge for wannabe heroes.

Creepy creatures that provide an interesting challenge. Not based on myth, but vibes with a mythical feel enough for me to find it cool and useful :) Plus their special hammer is an interesting artifact (can be wielded by insubstantial creatures).

BEST FREAKIN PAGE IN THE COMPENDIUM

Another Lovecraftian chaos spawn (this is the big boy), good to have stats for it, but overall - not too interesting. The additional lore section says that these creatures are summoned by "Demented Adepts of the Dark Arts (DADA for short)".

In myth, corybantes/curetes usually guard gods in their infancy; and they also dance. It's a pity they don't dance M&M!

This is good stuff, very useful and very epic/mythical.
Bonus points for providing some quick rulings for when a player wants to blind a cyclops. 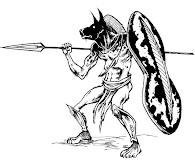 You cannot have a meaningful campaign without dog-headed creatures!
Bonus points for the Aegean "figure-eight" type shield in the illustration!!!!!