«««¶¶
A swamp creature, vaguely reminiscent of the Creature from the Blue Black Lagoon. The description is short but pretty evocative, I like that: "often hide
under the surface to leap at their surprised victims before tearing them to pieces" - gives a good idea for an encounter.

««««¶
A classic! I can't say anything bad about the basilisk, and not just because I'm petrified of being petrified. And I like the fact that it's kept as a middle-sized monster ("wolf-sized", to be precise). There are many bigger serpents, but this cunning fucker is awesome in its own right.

««¶¶¶
Bears are good to have around. I wonder if the OSR's beloved "Just Use Bears" strategy is applicable to M&M --- to a certain extent, maybe, you can take one of the Bears as the baseline "burly monster" statblock, and add in one of the "modular" monster powers the Mazes & Minotaurs Maze Masters Guide has on offer.
But on the topic of proper bears in the context of Mazes: perhaps they take a second (or even third) place to such beasts as lions, wild bulls, boars.
The Compendium offers two "standard" types and a polar bear.

«««¶¶
One of the myriad beastfolk entries in the Compendium. The little tidbits in the description are quite useful: we learn that they are enemies of the other beastmen, can be on friendly terms with humans, and, I love this: "they often keep cave bears as pets".
In general, Mazes & Minotaurs has a lot of "monstrous factions", and the authors often point out animosities, adversities, alliances between the monsters. The Maze Master can spin these into adventure hooks. And it is a prominent feature in the M&M megadungeon, Tomb of the Bull King.

««¶¶¶
Tiny bee-pixies. The only thing we learn about them is that they get along with the rest of the "sylvan" creatures like Dryads and Nymphs, so that's a hint on using them, but not much of a hook.
I would probably give them some sort of poison attack, to make them really sting.

«««¶¶
Pretty solid. Direct adaptation of mythical creatures, with an emphasis on their connection to Ares.

««¶¶¶
Subterranean rock-monsters. I don't know if they are based on anything (maybe a pulp movie?), and they don't feel particularly Greek or mythic, more "D&D-ish". A good thing to have, just in case you need something hard hitting in volcanic tunnels etc., but not too evocative. The additional lore section tells us the Black Stalkers are enemies of the Obsidians (subterranean humanoids whose skin resemble black bronze), so I have a feeling that the Obsidians were written first for the authors' campaign, and then the Black Stalker was added as their enemy. 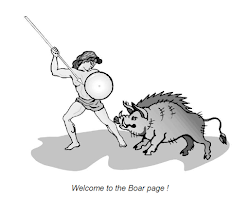 «««¶¶
I will let these picture captions speak for themselves. Very demonstrative of the Mazes & Minotaurs humor... :) Boars are cool, a boar hunt is always welcome, then you run into a Jugger-boar and you're gonna need a bigger boat boar spear.

««««¶
Pretty much Mazes & Minotaurs standard "chaotic monster" and orc equivalent. I'm giving it four stars because on the illustration, because you can clearly see that the boarman sports a Mycenaean boar tusk helmet.

«««¶¶
An aerial automaton that seats two warriors, what's not to like? The detail that two people can ride it is important: it's like a chariot, you can have a charioteer and a warrior. I would have loved to see an illustration with two riders.

«««¶¶
The torture device prototype is not mentioned. "Bronze Bulls were (probably) built by ancient wizards-engineers (perhaps the same guys responsible for Bronze Birds) as the bronze age equivalent of armored tanks – or perhaps they were used in decadent pit-fighting games as the ultimate corrida opponents." Which is also a pretty nice lore to round out a brazen army. And there is a variant with a flamethrower breath weapon.

«««¶¶
Another entry for the brazen army. Not as big as Talos, but a formidable enemy. Non-sleeping guardians or gladiators who fight Bronze Bulls in the Bronze Arena (!!).

«««¶¶
"Guess who created these metal mounts? (Secret clues are hidden in the previous creature entries)." I love these little M&M quips :)
The additional notes section outlines the pros and cons of bronze horses pretty nicely: untiring, armored, but without the natural instincts of real horses and vulnerable to weather effects.
Go bronze today!

«««¶¶
A distinct species, not Centaur-hybrids. Pretty useful to have around in your campaign setting to add variety.

««««¶
After the bear page and the boar page, we get the bull page! As I pointed out earlier, bulls are cool and mythic, so grab them by the horns or jump onto their spines and show those feats of strength!

And this concludes section for letter "B".
Bejegyezte: Tamás Kisbali dátum: 1:03