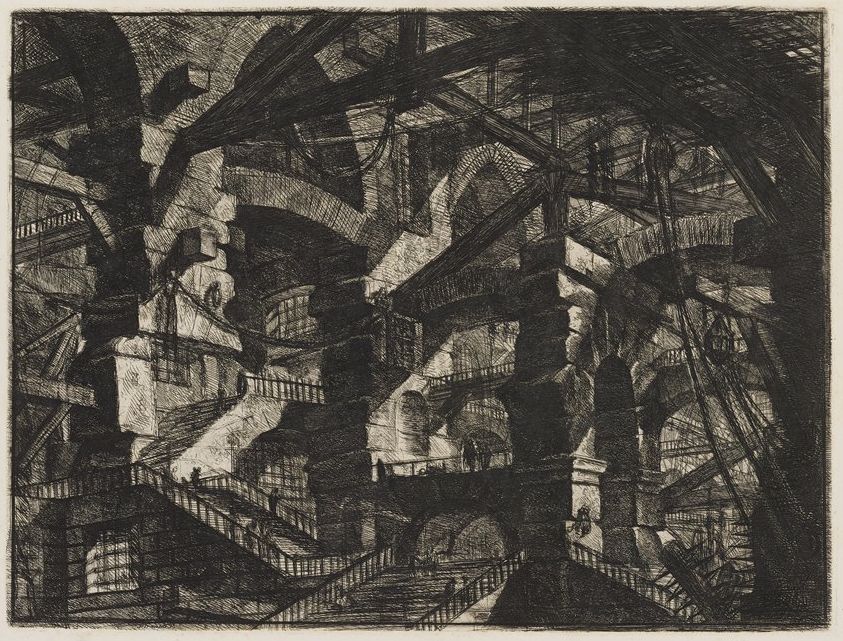 Contrast between total darkness all around and cone of light projected at smiling mask on pedestal. Giant spiders drop from ceiling.

16. Records of the War of the Worlds

Monochrome frescoes depict arrival of spaceships. Recipe of alien-killing poison under the plaster. Red ink used is actually sample of it.

Indoor field of wheat. Scarecrow in middle: eyes are 1000gp gems, if taken, dozens of angry crows burst out its chest.

Large hall, gatehouse defended by long-haired gnomes on opposite end. Demand sacrifice for passage, marble altar right there in the middle.

21. All Aboard the Mysterious Airship

500’ rope ladder dangling down through chimney, leads to floating zeppelin. The sky is different then what the characters might remember.

Roman gladiatorial equipment scattered on the sand. Whoever touches a piece is transported into an arena to fight beasts of warriors.

Rock balcony inside active volcano. Smoke imps offer to dive into lava lake and bring up fire pearls for a price.

Marble gate carved to resemble slime, inscribed: “I welcome the sick”. Only those infected with the deadly Purple Plague can pass.

Dogs stolen from noble estates bark sadly in dirty kennels. Bandits from the Sundown Gang plan to ransom them to owners.

Six identical people under glass pyramids, in trance, humming an eerie tune. Anybody who joins the humming can communicate with them.

Complex, loud machinery (cogs & levers), able to rotate another room in the dungeon. Hungry goblin mechanics reset it every 6 hours.

Floor perforated around the edges drops into pit of giant snakes. Pouch with six orange gems was swallowed by the biggest.

Long, narrow, musty corridor winds along many other rooms of the dungeon. Spy holes connected to the eyes of ancestral paintings.

Inlaid cupboards hold exotic objects. The only thing that can slay the evil overlord is hidden in plain sight among them.

Narrow passage. Scythe traps sprung in the past no longer a danger. Mummified hands reach out of walls and grab characters.

Four-tiered bastion, inside floors all collapsed. Many doorways above. Alarm: buzzing insect swarm flies to wake up guards positioned higher up.

50. Hall of One Thousand Columns

Demon sultan on diamond throne carried by manticores. Everybody who doesn’t bow is decapitated. Secret elevator to observatory in column #649.

52. Lair of the Singing Warlock

Stalls are saline pools. Giant crab mounts of local knights attended by blind servants (only they know how to saddle crabs).