Subterranean Gate: the scariest thing in Heroes III and something I'd like to see more of in hexcrawls

Heroes III is a wonderful game. I played it a LOT as a kid. One image that stuck with me is the Subterranean Gate... BEHOLD! 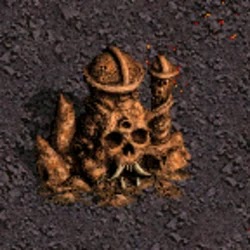 Passing through them takes a hero from the main surface map to an underground layer. The underground layer is the "home" to evil towns. And they have many connections to the aboveground layer, so they can provide shortcuts, alternative/surprise routes, or even the only way to reach an isolated region.
And these skull gates are so creepy! Their visual design is spot-on. I always remember feeling trepidation when directing a hero into them. You never knew what monstrosity guarded it on the other side...
I recalled them today because a user over at the OSR discord, Oaksmoker_Doomlord, posted his new hexmap, with "lots of cave paths linking secluded areas". He likened it to Zelda's Death Mountain. And of course, there is the archetypical subterranean shortcut during a wilderness adventure: Moria!
Adding a second layer to your hexmap, Heroes III style, can open up a bunch of possibilities. Of course, segments of these underground tunnels and cave systems can be played out as dungeon: like the entrance area, or a central lair. Longer stretches can be abstracted, procedural, wilderness-travel-like, with random encounters. And, like in Heroes III, they can provide alternate routes, tactical advantage, and more interconnections.
So, traipse the land, sail the seas, float down the rivers, fly above, or crawl beneath!