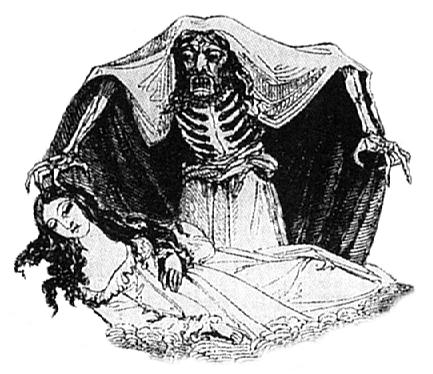 Some ideas on modelling "draining" attacks in old school games:

The drain targets and changes an attribute. Bloodsucking usually decreases physical characteristics, energy drain or psychic vampirism affects mental characteristics, but it's always interesting to have unusual leeching, e.g. if your system has a Luck attribute, why not drain it?
There are a couple of different ways to do it mechanically:

A psychic drain can either target an attribute (see above), or change some other "mental" thing.

A classic! Feared by everybody. Perhaps too severe to some DM's tastes. You can try draining experience points instead (e.g. creature HD x 1d10 x 100 ?), or model the loss of "experience" by draining memories and skills, as above.

The effect isn't constrained to a one-time drain. The creature latches on to the victim, forms a bond or channel between them (this can be physical, but also psychic, sympathetic, magical). Through this channel, the creature can constantly feed on the victim even when they are not present. This connection stays until severed by magical means or until the initiating creature is destroyed.
Some possible effects:
The parasitic connection can have a visible / detectable sign on the victim (change in skin or eye color, clothing preferences, sunlight sensitivity, mental disturbance, sickness, etc.).

Draining hit points ( = doing damage) is okay, but perhaps kinda boring? Weakening attacks can target Constitution too. I personally like using the HD attribute in various ways. For example:
The drained character must immediately re-roll all their hit dice. Constitution modifier applies only if it's negative. Take the new value if it's lower than the previous maximum hit points. Current hit points drop down to equal the new maximum or remain unchanged if already lower.

The bloodsucking creature drains 1d6 hit points worth of blood. If the victim is diseased, poisoned or has a similar ailment, they may roll a Save against Poison with a bonus equal to the amount of hitpoints drained; on a success, the victim is cured of the condition.
Alternatively, a psychic vampire takes away insanity, nightmares, etc.