I added henchmen and retainers to the crew, random generation courtesy of Meatshields! - http://www.barrowmaze.com/meatshields! 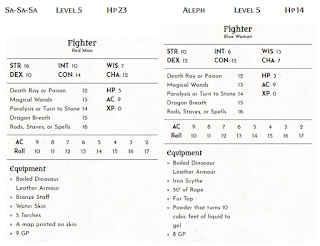 Last time, our heroes bravely retreated from the Tunnels of Melcha the Ghastly. Their survival was only possible because their carnivorous ape foes were scared away or engaged by an even scarier monster, a telepathic shoggothoid, the Otyugh.

Next week, after some healing and rest, they recruited a rag-tag group of 5 Men-at-Arms, a Cleric (who ran away with a circus), and a stuttering Torch-Bearer who hates orcs. And back to the cave they went!

Entering the first cavern, they realized that other creatures have found the place while they were gone. About 40 feet from the entrance, two blobby, but vaguely human creatures were digging through the debris on the floor. The demonic duo was alerted by the approach of the adventurers – now a 12-strong army. The monsters hesitated for a second, then, against all odds, swung into action and bumbled towards the adventurers! 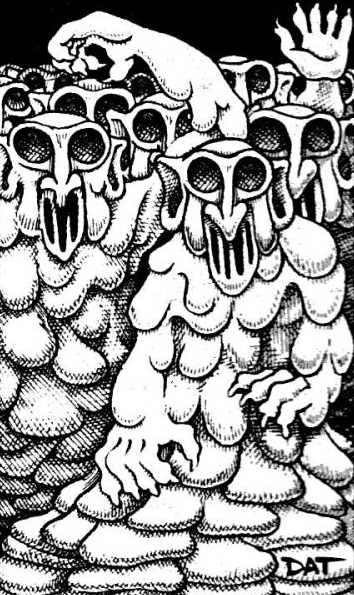 Derix, one of the Men-at-Arms, discharged his crossbow at one of the monsters, but missed – looks like the wineskin he was swigging added to his courage, but not to his aiming skills! The rest of the group (except Colgos the Torch-Bearer, who only hated Orcs, but these were not Orcs, so he decided to stay out of the fight) charged the blobby things with assorted weaponry. Of the army of Henchpeople, only Meretta managed to land a proper hit with her mace. The veteran adventurers were not much better, although Naki Green gave a good pummeling to the same devil with his staff.

But the creature’s goopy flesh started reconstituting itself before their very eyes!!

The monsters' counterattacks were slow, but unstoppable, and Meretta and Naki suffered some injuries.

Despite witnessing the uncanny healing ability of the monsters, the Men&Women-at-Arms stood their ground, and piled upon the creature that was already hurt. After all, if they cause enough damage, then maybe it won’t have the time to restore itself? Right? Right?..
Well, the combined assault of the veteran adventurers and the henchmen was enough to reduce one of the devils to a quivering mass of flesh on the ground!

“Look, it’s coming back together,” cried out Waylon, the chivalrious youth – only to be silenced forever by the hit of the second monster…

And indeed, the first monster’s body was slowly reconstituting itself…

Colgos the Torch-Bearer lit a torch, and proceeded to burn the flesh – but the uncanny demonic body didn’t catch fire!

In the meantime, the others tried to dogpile on the active monster: all four veteran adventurers managed to land solid blows, and so did two of their junior companions. This was just enough to put down the second monster as well… For the time… as its chunks of flesh started healing straight away.


Panicking, the adventurers started mangling the bodies and piling debris and rocks on them to slow down the seemingly inevitable process of regeneration...

Then they quickly moved on into the next cavernous room. It was, once again, void of creatures or treasure – however, this time the group was more attentive to the decorations, and discovered that one of the walls had an interesting mural. It depicted, strangely, more cavernous rooms, a few of which resembled the very spaces they’ve just visited.

Aleph touched one of the paintings in disbelief – and instantly disappeared!!

She found herself back in the entrance area, right next to the slowly regenerating monsters. Her companions were greatly surprised when she soon rejoined them, running out from behind their backs…

They decided not to linger (the threat of the monsters coming back to life growing stronger with every second), and moved over to the neighbouring room, the abode of the carnivorous apes. The apes were absent – likely massacred and devoured by the Otyugh.

However, coiled around the apes’ idol, there was now a giant snake, seemingly asleep…

The group didn’t want to fight this creature, but they also knew that under the idol there was a stash of the apes’ treasure… 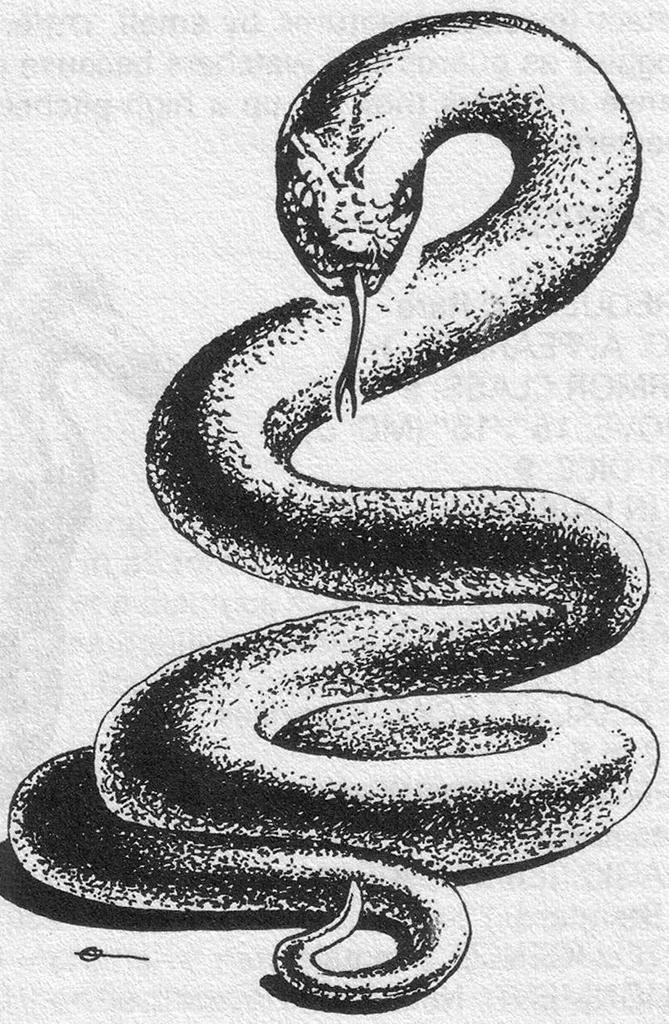 As slowly and silently as possible, the adventurers approached the monstrosity, and started hooking ropes around it. But as soon as the second rope touched its body, the snake stirred, hissed, and started rapidly uncoiling! Holding on to the already attached ropes, the adventurers tried to pull it back on the ground, but even their combined strengths was not enough to subdue the constrictor.

The tried-and-true tactic of piling on the enemy was employed once more. No battlecry was uttered out of fear of raising the Otyugh again… But there was plenty of pummeling and slashing, and the constrictor suffered plenty of damage.

In such closed confines, however, the group had little chance of avoiding the snake’s body… and not one, but TWO henchmen – Derix and Hemwyn – were trapped by the gigantic coils. Their spines snapped instantly.

Colgos the Torch-Bearer fled instantly, but Narloc, Meretta and Frela continued the fight. Of their numbers, Meretta and Frela proved successful (perhaps driven by righteous rage?), as both hit the snake. The creature was finally finished off by a killing blow, delivered by Naki Green!

The snake hissed one last time and collapsed. The adventurers glanced around in fear --- but nor the Otyugh, nor the goopy devils were in sight.

Finally, they were able to check what was hidden under the idol… And found a small, but rather pleasant heap of treasure: lots of ancient coins, a tiara made of a silverish metal, and an expensive jade necklace. The veteran adventurers appraised the hoard to be worth around 7000 silver pieces!