[LotFP] A Field in Lorraine 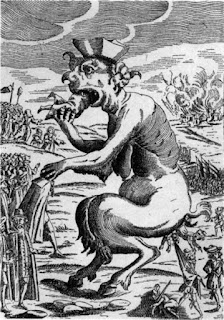 I've put together a short document with my ideas for a weird & nasty & dark fantasy game set in the aftermath of the Thirty Years' War. This is not a scenario or adventure, but rather little atmospheric pieces that help to show the world of 17th century Weird Europe.

Here's the link to the .pdf:
https://drive.google.com/open?id=0B2c4f45yVNuOa3R3X2pkVVg1NVk


"This is not a “historical” game. The Thirty Years’ War and other events are used as a backdrop, but their importance or overarching role is only understood in retrospect. People who are in the middle of it do not know whether the war and wars have ended or not. They do not have up-to-date information from the frontlines. News travel slowly, deception and rumors are abundant.

Lorraine is defined as the general area of events, but it is important for the tone of the game to keep the setting vague, regarding both chronology and location. Maps and timelines are only known to strategists and annalists. Player characters and the everyday people they encounter are utterly, hopelessly lost. Locals know their own village, maybe the road to the next hamlet. Superstition warns against going to certain areas, and for a good reason. Bands of marauders and deserters are menacing the lands. Many villages are completely abandoned; most of them are only inhabited by women, children, and the elderly.

The player characters are soldiers, mercenaries heading back to their villages. They served their time, their battalion was re-organized, or, more likely, destroyed. But they are not in a hurry… For they know that their “home” is not the cozy place it used to be. The player characters fear that the same atrocities they committed in foreign lands were carried out against their own villages by other soldiers."

This was all created with Lamentations of the Flame Princess on mind, but can be used with any system. I hope to run this game soon for a couple of friends.
Bejegyezte: Tamás Kisbali dátum: 9:48