The return to the pulp roots of fantasy genres is a common staple in the OSR world. Authors embrace any possible combination of "sword", "sorcery", "planet", "sandals", slap on a few tentacles and eldritch rites and popular Lovecraftisms, and the game is ready. This is not meant to be a criticism - I'm a sucker for this kind of stuff, so I'm only happy to see it implemented.

But there is a stand-out example. 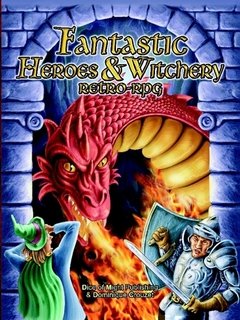 One of the most interesting features of Fantastic Heroes & Witchery (FH&W), the OSR game written by Dominique Crouzet, is the inclusion of a whole "Weird Tales" game mode alongside the traditional fantasy of elves & dungeons. These races and classes are meant for "Swords & Planets" settings (p. 16), so basically for science fantasy, but many other pulp variations are implied.
A thing I really like about this part is that Crouzet includes out of the box playable races that are usually considered "monstrous" and "evil". There are Reptilians - humanoids descended from the dinosaurs (oh you crazy lovely science fantasy Darwinism!), chaotic Witchlings, Revenants - cursed ghosts, Winged Folk (clearly a nod towards Pygar, the blind angel!), and so on.

The book covers a lot of ground, gives us lots of options to model basically any fantasy book or movie that came out between 1850 and 1980. "Planet of the Apes", you say? There is Primate weird race. Add jet-packing Sky-Lords and mad scientist Savants to the mix. Crouzet even released a document of additional science fantasy goodies, loaded with characters "inspired by old TV shows or movies, though in order to avoid copyrights infringements, they have got different names and backgrounds". He references Logan's Run, Dune, all the good stuff.

And there is another pulp line, a foray into Call of Cthulhu territory. There are Tainted Humans, mutated, twisted people, who can also be used to model, for example, Deep One / human hybrids. For class you can pick the Necronimus,the Occultist or the Psychic - all classic tropes of pulp occult subgenres. This is definitely something I'd like to see more of.

FH&W doesn't get as much attention as many other games in the retro-gaming sphere. It may be due to insufficient marketing... but I have to admit, that the book as it is right now can seem unfocused and under-edited. The amount of sheer awesomeness it holds is both its advantage and hindrance... But if you, as a DM, have a certain pulp setting on mind, you can surely pick out just the classes and races and elements you need and offer them to your players.