I generated a random dungeon using the ever-useful donjon - a Level 7 cave, filled with Aberrations. Unfortunately, I forgot to copy the random seed! But I have the dungeon as a .html file. I rolled up four Carcosa characters - obviously, with the Total Party Kill generator by Ramanan Sivaranjan. As I was using a dangerous dungeon, I advanced each character to level 5. Then I basically just started running them through the dungeon, checking for random encounters every turn, and looking at the room keys only when they entered a new cavern. I wrote up an account of the (mis)adventures. In some places, I supplemented the description with random ideas generated by Talk to Transformer.

The small group of fighting people – all of them veterans of the grave robbin’ and cavern crawlin’ trade – entered the Tunnels of Melcha the Ghastly, looking for what might be left of the famed treasures of that evil overlord of the past. Sa-Sa-Sa took lead, because it was his map (drawn on human skin!) that pointed the party towards this ancient place.

To their surprise, they found the cave weirdly illuminated by a bright light, no doubt of sorcereous origin. Every 40 feet, a strange glowing bulb was inserted into the wall. The adventurers put away their torches, and entered the dungeon.

The short entrance passage led to a cavern with many signs of past use and destruction: Spirals of gray stones covered the floor, and several headless statues were scattered throughout the room. The warriors quickly searched through the rubble. The statues were all painted black, and each represented a unique figure. The most famous stood at the center of the room – a tall, thin man. He was dressed completely in black, with three pairs of gray legs encased around his torso.

Sa-Sa-Sa led the adventurers into the side-passage to the east. The adventurers recoiled from the vile rotting odor filling the cavern… However, they discovered several bent copper coins scattered throughout the place. They gathered them (although they didn’t seem particularly valuable), and proceeded deeper into the caves through the main passage.

The next cavern had several smaller niches and passages breaking off from it, and the group quickly searched around. The place turned out to be disappointingly empty – but luckily, also devoid of any monsters. 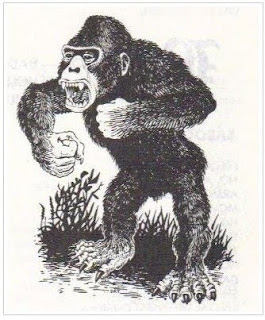 Luck ran out by the time they got to the next cavern. floor was covered in square tiles, alternating white and black. There was an idol in the south-east corner of the room. It depicted a tall man, with a long, pale head, holding in his hand two tiny hands with three fingers each and a long, pale nose that was curved on the sides.

Three gigantic apes were kneeling before this altar, murmuring. However, their keen senses alerted them of the presence of the adventurers, and almost instantly they turned, maws agape, saliva dripping from their fangs.
The apes attacked, but the adventurers were ready to receive them. Nergama threw his grappling hook across the room to create a tripwire or distraction to slow the simian charge – and one ape tripped over it! The second ape got stung by Naki Green’s whip – this caused more annoyance than pain. Aleph took a wide swing with her scythe, but missed the third ape by a margin. Sa-Sa-Sa also missed.

The tripped ape roared and got to its feet, while the other two started clawing and biting the adventurers. Naki Green avoided most attacks, but Aleph wasn’t so lucky: the carnivorous ape grabbed her with both its arms, and rend her flesh! But Aleph, despite being the weakest member of the party, survived this attack.

Sa-Sa-Sa ran to Aleph’s help, and delivered a MASSIVE critical blow to the ape. It let go of Aleph, but stayed very much alive… Aleph retreated behind one of the stone pillars, blood gushing from her wounds. She sprinkled the jellifying substance on the injuries, turning the blood into a gel and staunching is flow!

Naki Green whipped the ape one more time, but the creature didn’t even feel it. Nergama pulled back the grappling hook, swung it around his head like a lasso, and threw it at the third ape – but missed. Things weren’t looking too flowery.

The apes attacked again. One chomped off Sa-Sa-Sa’s left hand and left some nasty deep claw marks on his body. The other charged Naki Green and went for his neck right away, causing some serious wounds. The third ape finally closed the distance and grabbed Nergama with its vicious claws, grappling and rending him! At least its fangs didn’t make contact.

The sounds of battle roused something in the caves…

The combatants were first hit by the stench of offal and dung… Then noticed a shambling, monstrous form emerging from the depths of the cave. A bloated body, towering on three legs, with a mess of tentacles and thorn-like bulges!

Weird echoes resounded in everybody’s heads: “Who dares disturb my sleep?!” The foul creature was projecting its thoughts into their very minds!

The apes roared and for a second stopped pummeling the adventurers. Then they considered their options – and two of the apes suddenly jumped and started climbing up the stone pillars towards the ceiling. Only the biggest and burliest ape, perhaps the alpha male, held its ground…

The adventurers weren’t too keen on encountering this aberration either. “Otyugh!” Sa-Sa-Sa whispered, as that was the name given to such creatures in his home village. “I will drink your marrow, I will devour your flesh,” the voice in his head whispered.

The big ape roared and charged the shambling Otyugh.

The fighting men of Carcosa used this opportunity to retreat back towards the cavern’s entrance… As they moved out, they caught a glimpse of something metallic gleaming under the idol the apes worship – but it was too dangerous to go for it just now…